I took the 2-2.5 hour train from Málaga to Sevilla (in English: Seville) on Sunday, 17 June. Rather than driving myself crazy trying to run around and find museums or monuments that were open, I decided to just stroll around the city, enjoy the scenery, and eat and drink. Made for a great first day, though given how little time I had in Sevilla I came to regret that decision at the end (I missed a lot!). Trying to find a balance between wanting to see and do everything (FOMO) but also relaxing.

So back to my day of pure gluttony (and joy). I started at a charming neighborhood restaurant recommended to me by the sweetest woman in Sevilla- my Airbnb owner’s mother. She told me I absolutely could not leave Sevilla without trying two things: Toro (bull), and caracoles (snails). Toro was not an option for me but I decided, to give the caracoles a go- I’m trying to be flexible with my diet (except, hard stop on land animals and fowl) to fully explore the culture. Plus, I used to love escargot. I learned the traditional Spanish preparation couldn’t taste more different; very earthy. Glad I tried them, but not something I was tempted to eat a second time. (Realizing that being strictly vegetarian in the US is making more and more sense given my current palate). 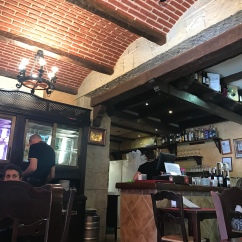 Bar Antonio (I think?), where I had the caracoles. Super charming restaurant with great service. 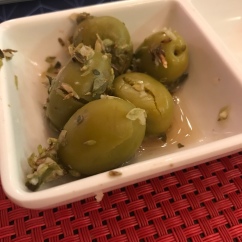 I’m converting into an olive fan. These were nom nom!! 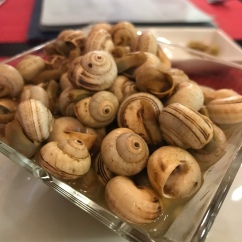 Here they are. I kept saying “I’m sorry” before eating each little one… and yes, that gets exhausting. Ha!

After my meal, I headed to Bodega Santa Cruz, a bar with tons of amazing reviews online and it did not disappoint. It was standing room only, crowded with an equal mix of tourists and Spaniards alike, eating, drinking, and watching a World Cup game. It’s kind of like the scene in “Eat, Pray, Love” where Julia Roberts is in the crowded cafe and her friend just yells an order across the lines of people in front of her to the men working behind the counter. Pretty much the same, except I was able to work my way up to the bar and grab a space to stand and drink at. Had lots of fun chatting with the guys who work there, and before I knew it I had to head out to for my first “Airbnb Experience.” I went on a night walk (11pm-1am, because…Spain) around the historic district with a small group (4 of us, including the guide). It was awesome! Our guide knew so much and gave a great overview of the history of the city and mixed in truth with urban legends. And I got to see the home (former jail) where Cervantes started writing Don Quixote! For anyone visiting Sevilla, look for tours from Carolina y Jaime 🙂 Images below are from my first day in Sevilla.

Cab driver dropped me off here and I just thought this old couple strolling down the street was precious. 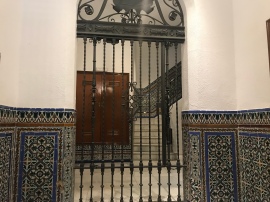 The gorgeous entryway in my apartment building.

Plaza de San Francisco, right across from my apartment. Also, the Spanish still eat, drink, and play outside when it’s 100°F, they just throw up giant tents to provide shade and some respite from the heat. It absolutely helps! 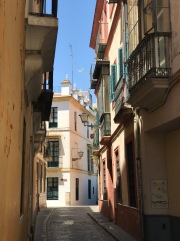 Just the most perfect image. Captures everything that is Spain: streets relatively empty during midday (shops closed, everyone but tourists are home), scooters are a primary form of transportation, all of the tables and umbrellas lining the streets, and in the background is the bell tower for the Cathedral. 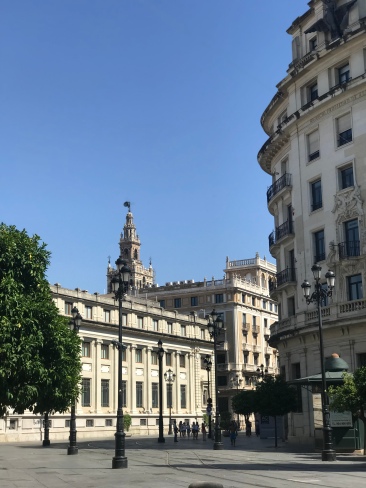 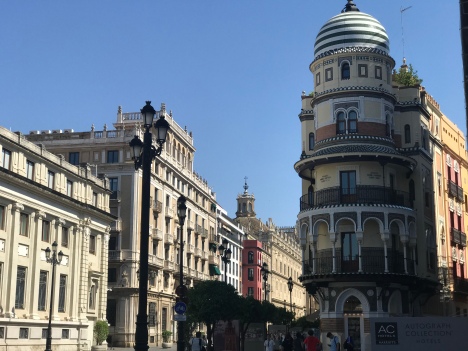 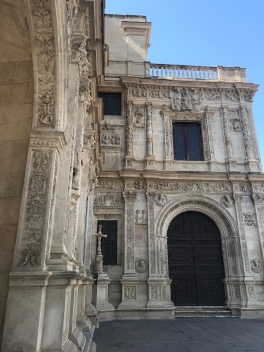 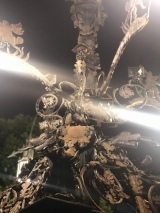 Cross in one of the squares we visited during the night tour. Apparently those are snakes, not dragons. 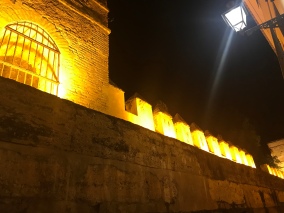 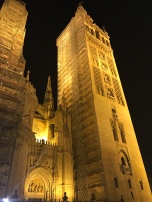 First of so many images I have of the Cathedral. Largest Gothic Cathedral in the world!

Building in the same square as the Cathedral. 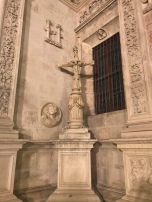 Cross at the corner of Town Hall, symbolizing the end of the Spanish Inquisition.

This building was the former jail where Cervantes was held and where he started writing Don Quixote!

During my final 1.5 days in Sevilla, I visited the Plaza de España (Game of Thrones fans, this is a filming location) and the surrounding gardens/park, went on another Airbnb excursion (paddle boarding with Paddle Surf Sevilla, which I highly recommend), and did a tour through the spectacular Real Alcázar (Royal Palace).

Benches around the Plaza de España; one for most (I doubt all) cities in Spain. 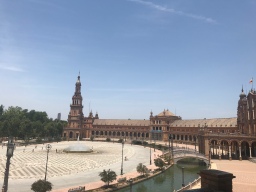 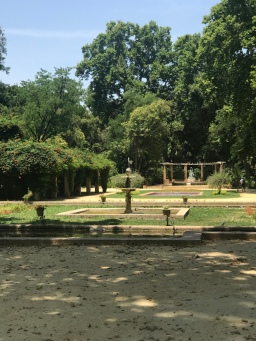 Park across from the Plaza de España

This beet salad rocked my world! So damn good.

Finding a restaurant specializing in vegetarian options is the needle in the haystack. 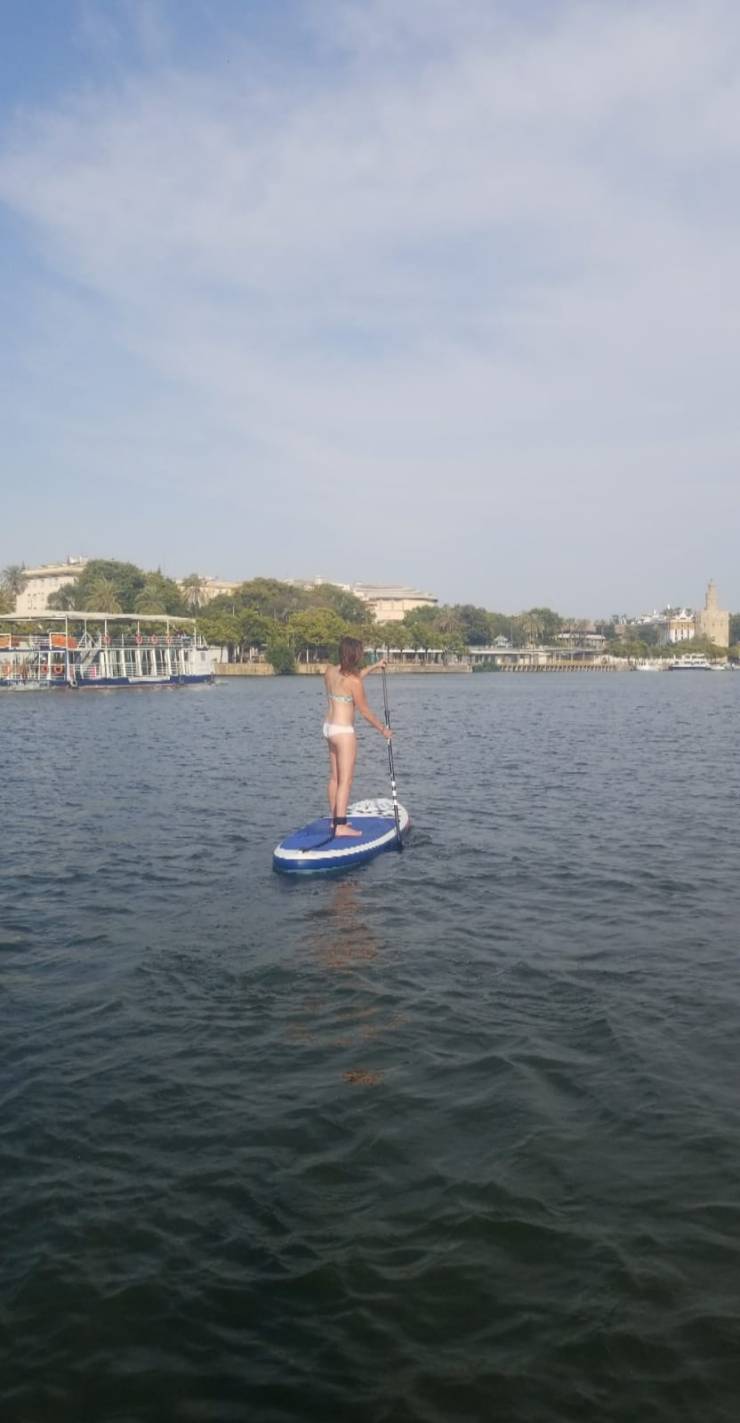 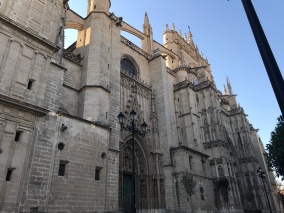 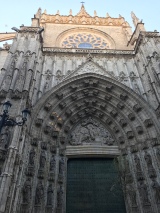 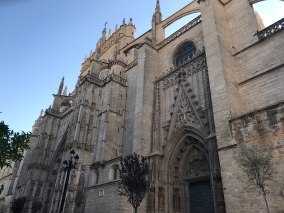 And finally, photos from inside the Real Alcázar Sevilla. This palace and its gardens is really spectacular and definitely worth a visit while in Sevilla! 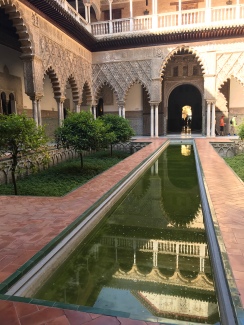 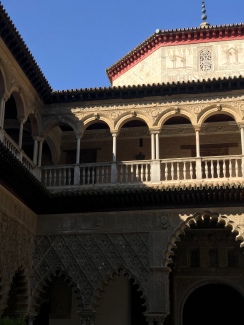 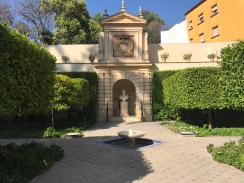 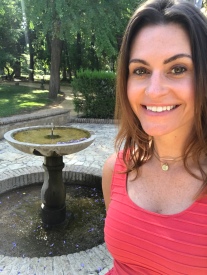 But I was really loving this fountain.

Another fountain… plus a couple of duck butts. 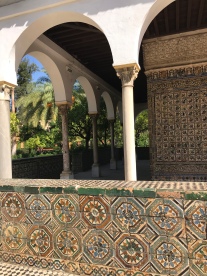 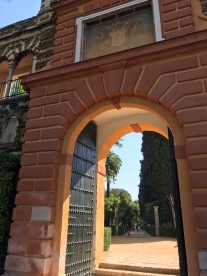 View of these fountains from above… 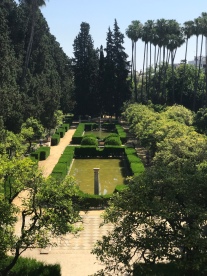 I really liked these fountains in particular. 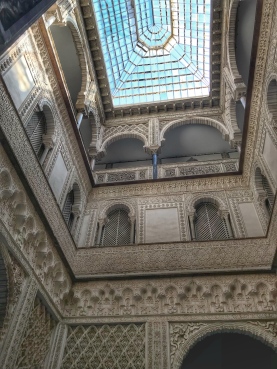 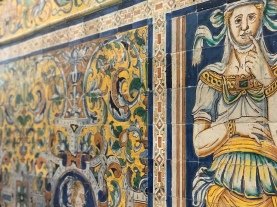 Labyrinth in the garden. I couldn’t help but think of S-Town (shoutout to NPR). #cuzimanerd 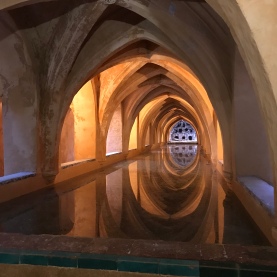 The baths at the palace. Not only beautiful but this room was a solid 20°F cooler than outside temps.