I kicked off my second, and final, week in Málaga doing the only thing you can do on a Sunday: museums and the beach! (Btw, all of the beaches in Málaga are topless. That was a first for me!) With the exception of a few shops and restaurants in the city center and near the Port, everything else (including grocery stores) in the city is closed. Truly a day of rest! I visited the two most significant art museums in  Málaga: Museo Carmen Thyssen (currently featuring a special exhibit focused on the Mediterranean, including works by Picasso, Signac, Matisse, and Dufy) and the Picasso Museum (with a special exhibit featuring more than 400 works by Andy Warhol). Photos weren’t allowed in either museum (except for the Warhol exhibit), but I managed to sneak a few in Carmen Thyssen. But in the Picasso museum… forgeddaboutit! So many docents watching like hawks. But it really is impossible to capture how spectacular Picasso is on an iPhone anyway. LOVED his works and feel like both museums were worth the time and cost (total of 21€ = approx $25). 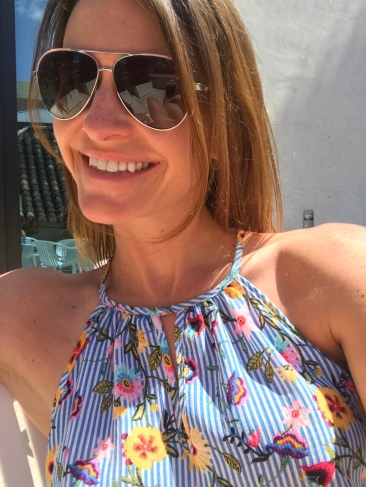 Sorry for the glare, snapped the photo quickly so I wouldn’t get yelled at (again…ha!) 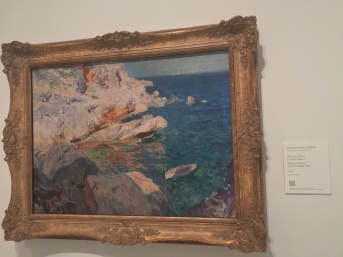 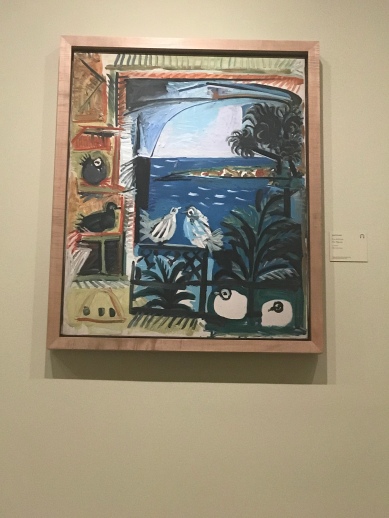 A Picasso at Carmen Thyssen

The only image I took at the Picasso museum. And definitely one of Warhol’s most famous.

Can we talk about this please? These are seriously cans of Campbell’s soup for sale in the museum gift shop for 4.50€ (= $5.30). BWAHAHAHAHA! Dude, I get it, Warhol and his soup paintings but for real?! Who is spending > $5 on a can of this soup? LOL!

After leaving the beach in the evening I walked  through the Port area (where cruise ships dock), and it turns out that the touristy areas can be great. Found an open air art market with a great live band, and of course a bar with decent Sangria. Sunday Funday for sure! If I didn’t have 1.5 months of travel in Spain and Portugal ahead of me, and no room for souvenirs, I no doubt would have bought a piece. Some spectacular art pieces available. 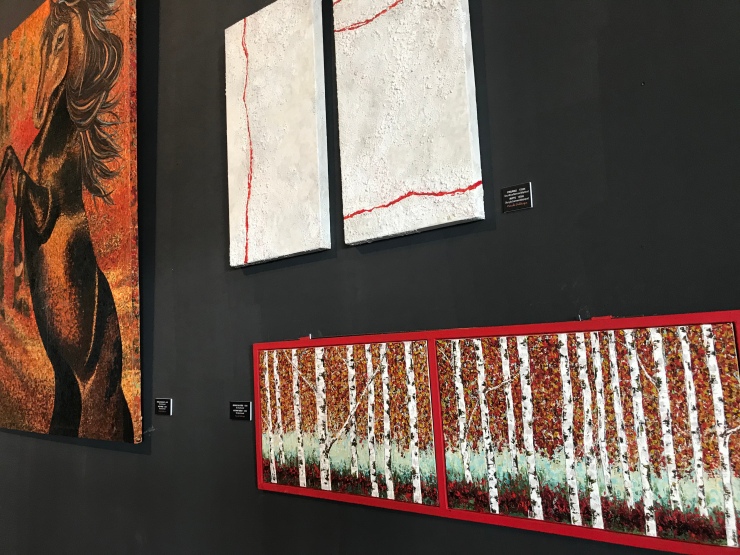 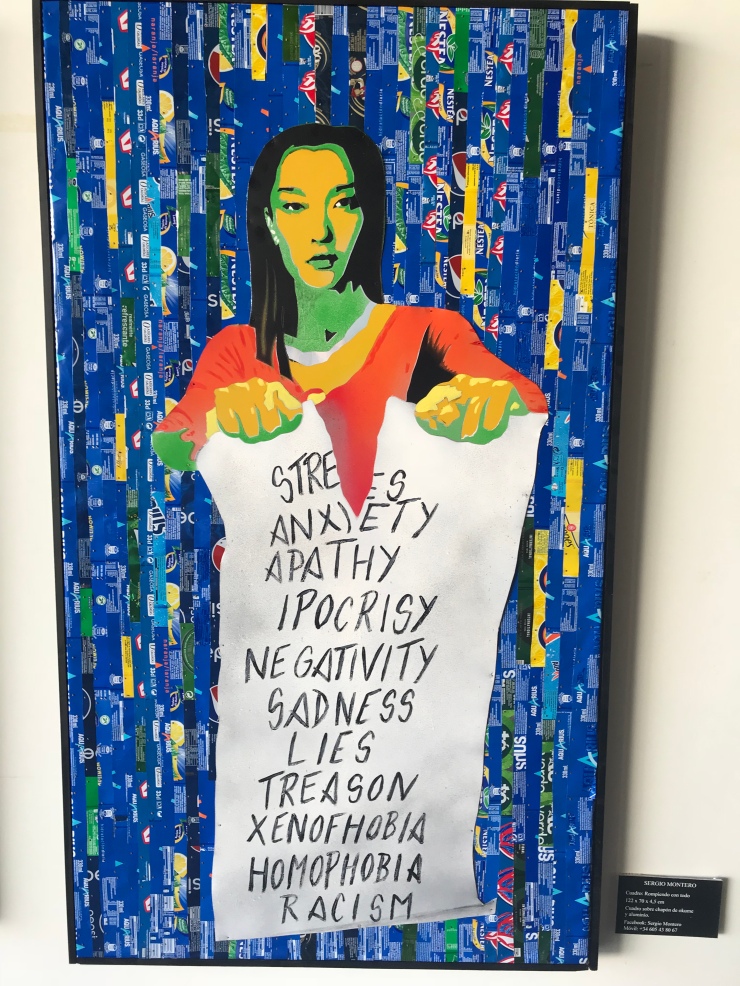 Thanks to a discussion in class I learned where the best beaches in Málaga are, and life as I know it was forever changed. I am now a fully converted fan of topless beaches. In the US, these are nonexistent and there are two main stereotypes about such beaches: (1) they are full of old and/or fat people you wouldn’t want to see naked; or (2) super sexualized. First, it’s Europe so there just aren’t many fat people, period. Most of the women topless on the beach are thin and fit. Second, and far more important, being topless is such a non-issue here it couldn’t be more different than a sexual atmosphere. So many families at the beach and the children (ranging from very young to teenagers) don’t even seem to notice the boobs because it’s so normal. I watched this beautiful mom (early 30s and very fit) standing on the beach talking to a friend; both women were topless, and the entire time the mom had her arms around her 10-12yo daughter, who seemed oblivious (from the perspective that it was anything to even notice), while her friend’s 7-8yo son was running around them playing. Men do not stare and nobody is taking photos. People are just existing and it’s really beautiful. To me, these beaches are a great example of why international travel is so important- stereotypes can be dispelled of so quickly. This is the only photo I took at the beach, which I felt was appropriate to take and share, because it doesn’t compromise anyone’s privacy and isn’t too revealing. And this couple (mid-20s, lovely and fun!) is super gorgeous in this shot! I LOVE women with body confidence.

Perhaps not surprisingly, I spent quite a bit of time in my last week in Málaga at the beach (for my lady friends in the US who aren’t yet convinced, no tan lines on top ladies!!). The other big event that started this week was the World Cup! Sadly, the US didn’t qualify, so I’m psyched to be in a country that did qualify and where people LOVE fútbol! I’m so grateful that two wonderful people I met at my language school, Jürg and Andrea (both from Switzerland) were kind enough to let me tag along for Spain’s first big game- against Portugal. And… one helluva game! Also, Andrea and I definitely agree that Ronaldo is gorgeous. And though it pained Jürg to admit, sweet baby Jesus he is an amazing fútbolista! Such a fun way to close out my last day of classes and final weekend in Málaga. 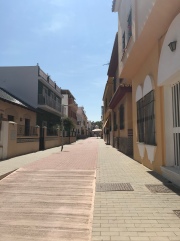 This city reminds me SO much of LA’s South Bay: paradise, including the precious walk streets. 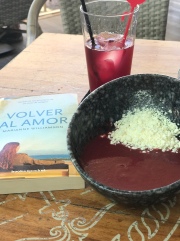 The best Gazpacho I’ve had in my life. Paired with traditional summer wine (similar to Sangria) and the Spanish language version of one of my fave books (Return to Love).

When I see kids playing with bubbles I think of “Knocked Up”:I wish I could love anything in life as much as Kids love bubbles.

A kiss cures everything 😘❤️ 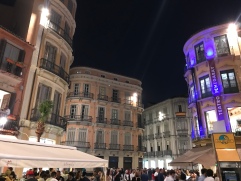 Málaga city center at night. How gorgeous is this city?! 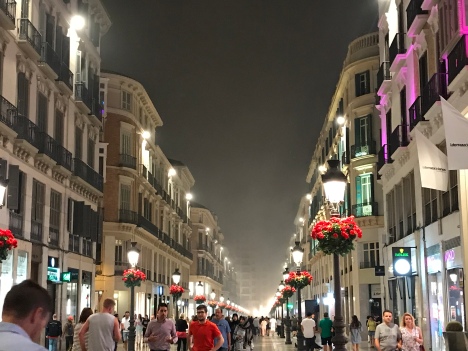 When you learn that THE chicest street in Málaga is named for the family of a dear friend! Veronica ❤️❤️

Walking home from the beach, saw a wedding shoot. Impossible to see this and not smile and be happy. Love really is the best!!

My final shot in Málaga: coming across a foosball tournament. Perfect way to end the blog on Málaga.