My trip started back in June 2018 with a pilgrimage to Santiago de Compostela, Spain. Fast forward 10 months and I found myself in Israel, home of some of the most sacred sights for Christians, Jews, and Muslims (my mind immediately begins repeating Maya Angelou, “We are more alike, my friends, than we are unalike.”). Much like my trip to Ethiopia, Israel was a bit of a last minute decision, so I unfortunately only had four days in the country. Definitely not enough. People in Israel describe each of their cities as its own country, and it didn’t take long to understand why. There is an incredible diversity of character, culture, customs, geography, and history, throughout Israel. So four days barely felt like I began to scratch the surface. Nonetheless, I’m so glad I squeezed in a bit of time there! After all, being so close (in Egypt, barely over 1 hour flight from Cairo) it felt foolish to not take advantage of geographic proximity and squeeze in the trip. And from a practical perspective: Tel Aviv is expensive, so if you want to stretch the budget, best to spend less time in expensive cities/countries and more time in places like southeast Asia, much of Africa, or Latin America. (That said, I came *thisclose* to extending my stay in Israel and nixing my visit to Italy, because I enjoyed the country so much and wanted more time there.)

I’ll begin with one of the main reasons I hadn’t visited before: having a passport stamp from Israel can make it massively difficult to gain entry to a lot of countries in the world (in particular, just about every Muslim country, which I tend to visit with much greater frequency than the only Jewish State in the world). But here’s the thing: Israel stopped stamping passports in 2013! When you arrive to Israel you are given a separate sheet of paper that has your photo (plus some other information), which is printed by the immigration officer, and that is stamped. This is not something you need to ask for, it is automatic. However, if you tend to frequent (and/or especially, do business in) one of the Muslim countries with a particularly tense relationship with Israel, you may still want to hold off on making that trip. Security at Ben Gurion Airport is the most intensive of anywhere in the world. My “interview” upon entry with the immigration officer wasn’t nearly as onerous as I had anticipated, seeing as how I was arriving from Egypt (and as luck would have it, the day before I arrived a rocket was launched from the Gaza Strip to north Tel Aviv). However, departure was another story. Be sure to leave yourself LOTS of extra time to get through security when exiting Israel, especially if your passport has any stamps from a Muslim country. I had to go through secondary screening, numerous interviews, and every item in my carry on bags was removed and individually swabbed (more than once). I’m honestly still a bit confused as to why it was so much harder to leave the country than gain entry, but I made it through fine (they do actually ask all passengers subject to the additional security checks when their flight is boarding, I presume to ensure nobody misses a flight).

When I arrived, I initially planned to stay only in Tel Aviv. After all, four days isn’t a lot of time. Thankfully, I met some awesome folks while in Tel Aviv (including my lovely Airbnb host, Meira) and they all assured me that taking a day trip to Jerusalem was definitely worth it. So I spent three of my days in Tel Aviv, and one day in Jerusalem. The weather was definitely on the cold side, so my only time at the beach was while bundled up in my “new” winter coat. New in quotes because I arrived in Tel Aviv with only summer clothes (except for one sweater), but loathed the thought of spending a lot of money on winter clothes at the end of (this leg of) my travels. Thanks to Meira I found Ani Shlishi, a non-profit used clothing store, where I picked up a pair of designer jeans, a never-been-worn sweater, and a black winter coat for about $15USD. SCORE! 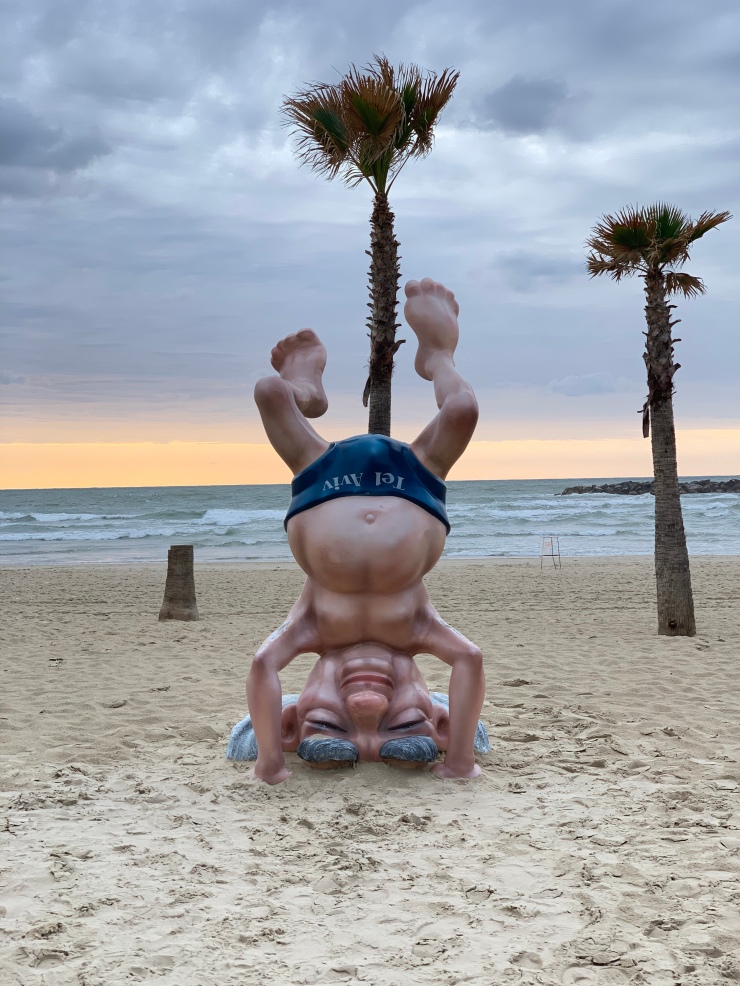 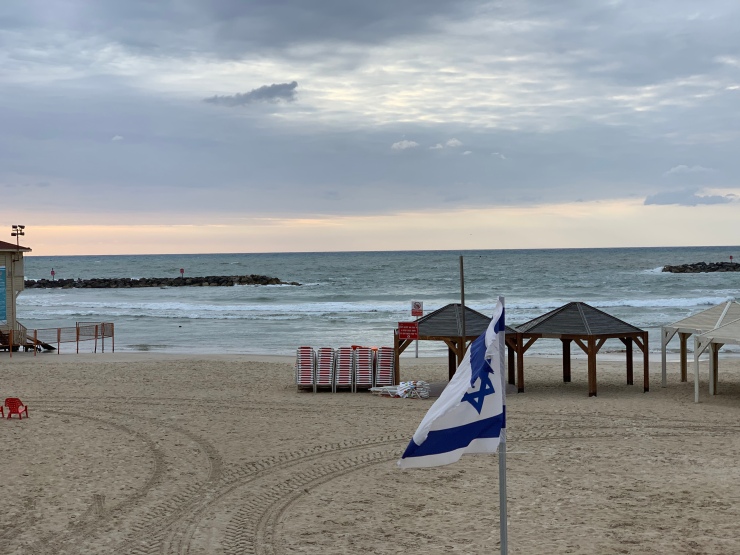 Most of my time in Tel Aviv was spent walking around the city, exploring its neighborhoods, eating loads of hummus, and drinking some really fantastic Israeli wine. My favorite hummus meal was at Hummus HaCarmel, located in a former synagogue behind stalls in Carmel Market. Another favorite stop was at Hamalabiya for a vegan version of the traditional Israeli Malabi. Yum! (Thanks Oran for cluing me into such local gems!) My favorite red wines I tried were Pelter Trio (https://pelter.co.il/en/) and Jascala Cabernet Sauvignon. 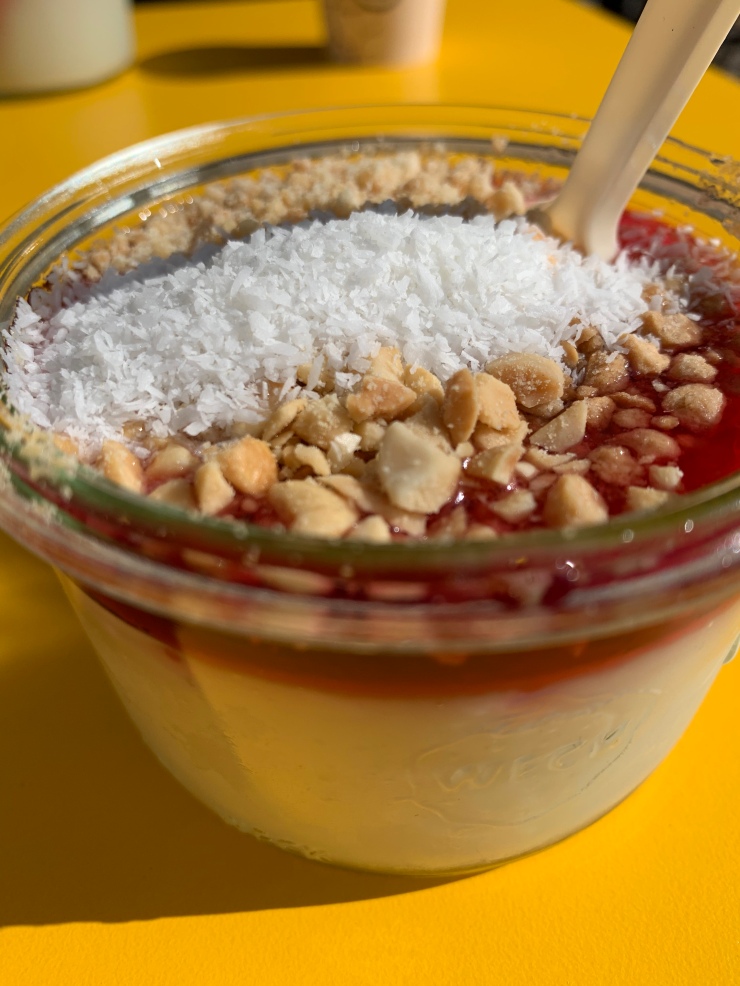 I also spent some time walking around Tel Aviv’s Jaffa neighborhood, the old part of the city near the port. It’s a really charming area. I visited the Clock Tower, the Egyptian Gate, the Wishing Bridge, and one of the best views of the city. 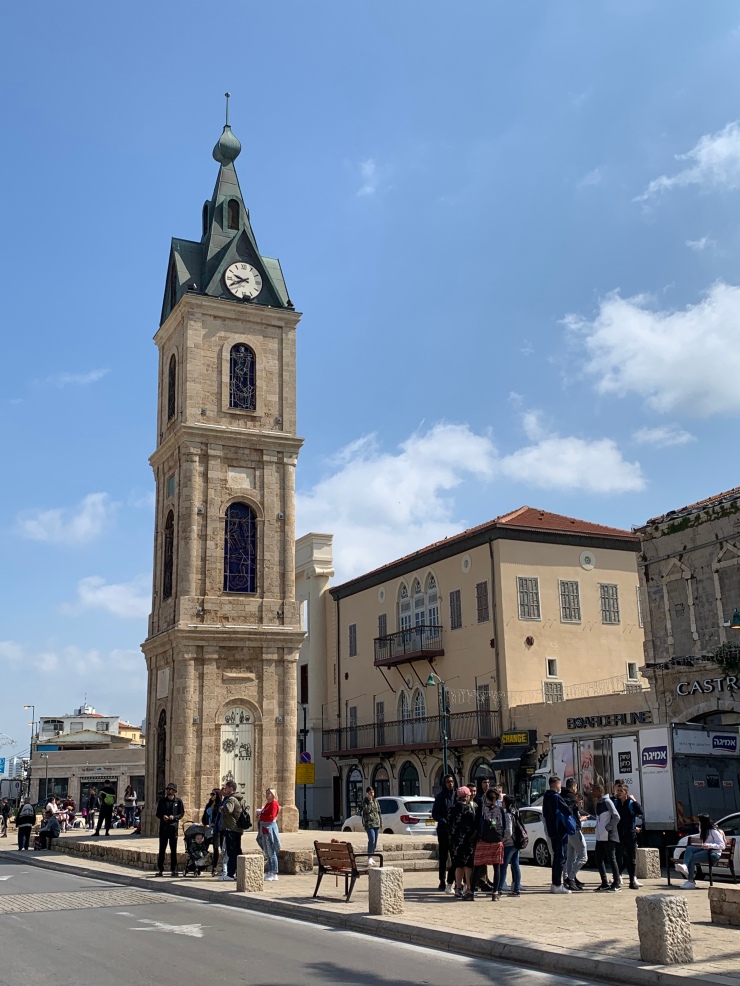 Thanks to Jonathan, a wonderful man I met in Tel Aviv, I was gifted with an awesome walking itinerary through Jerusalem. (And introduced to Pelter wine, yum! Double thanks Jonathan!) The walking itinerary definitely doesn’t cover everything that Jerusalem has to visit, but the itinerary below is something you can easily fit into a single day without feeling rushed. If you want to add in more key sites, there are loads of resources online that can guide you through the Stations of the Cross, where to visit Mary’s home and burial site, some of the city’s mosques, and more. Because it is so navigable (tip: download an offline map from Google or maps.me before you start walking), I definitely advise doing your own self-guided tour and not spending the money for a group walking tour. While there are lots of organized tours from Tel Aviv to Jerusalem, these will cost you more than $100 for the day. Compare that to the $9USD (roundtrip) I spent on a public bus (very nice, VIP-type buses), which leave super frequently from both cities, and you have the flexibility to see and do what you want, and stay as long as you want.

1. Starting point: YMCA (visit bell tower). Note: if you are traveling solo, reception at the YMCA will not permit you to go up to the bell tower alone. If you want to pay for two people, you can still go up. My advice: not worth the extra cost. There are loads of great rooftop views further along this itinerary.

4. ‎Notre Dame of Jerusalem. Visit Wine & Cheese restaurant on the 4th floor (go to the back balcony for the view). The Wine & Cheese restaurant is pricey, though they have excellent wine (this is where I discovered the oh so yummy Jascala Cabernet Sauvignon). But if you want to catch the view on a budget (free!): take the elevator up to the 4th floor. When you exit the elevator, turn right and exit through the glass door onto the rooftop walkway. From here you can even better views than from inside the restaurant. 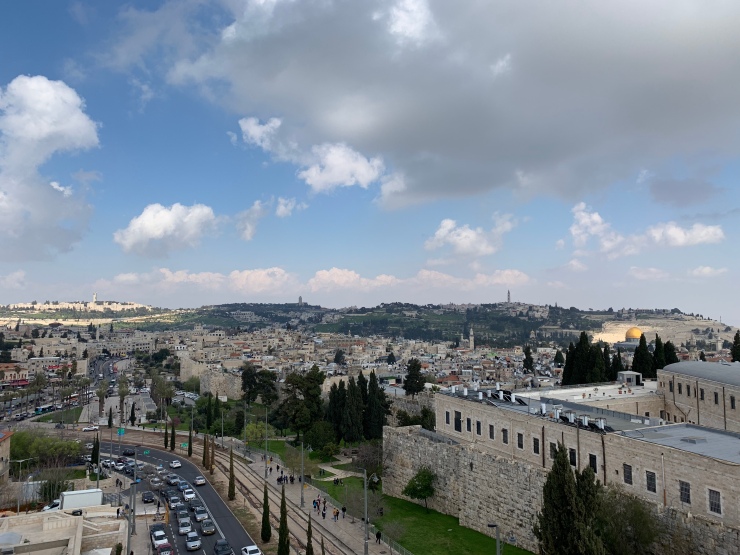 5. Enter the Old City through the Damascus Gate

6. ‎Visit the Austrian Hospice. While there, pay the small fee to go onto the roof top (more great views!). And after taking in the view and snapping some photos, head down to the garden café and enjoy a piece of strudel. 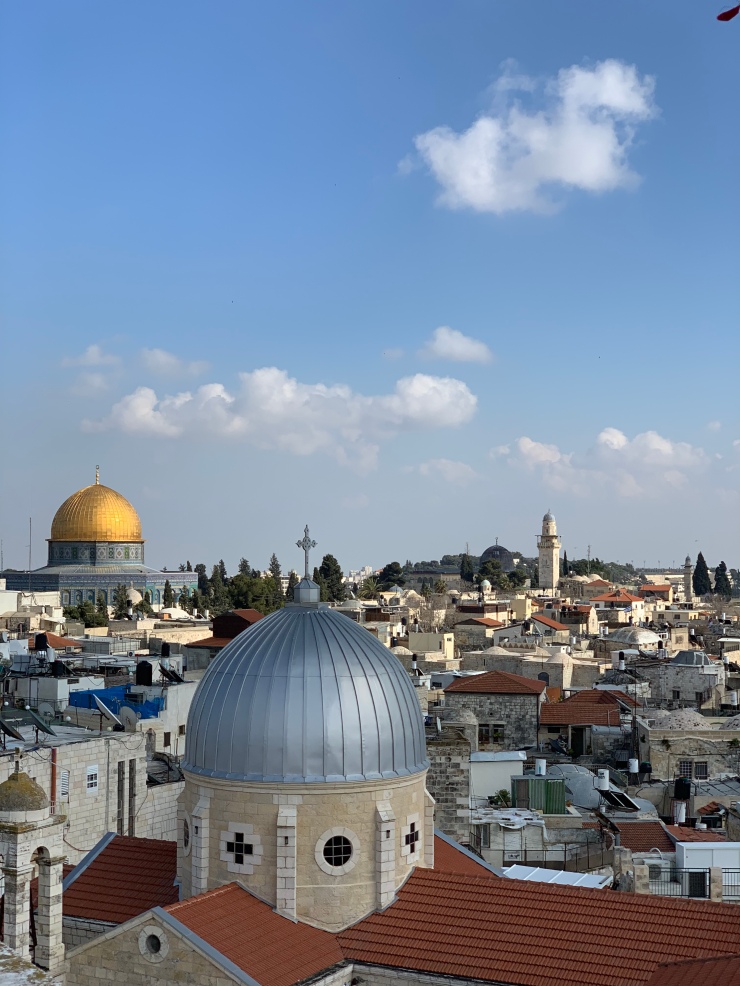 7. Follow the Via Dolorosa towards Holy Sepulcre. You can also pass by the jail that held Jesus Christ. 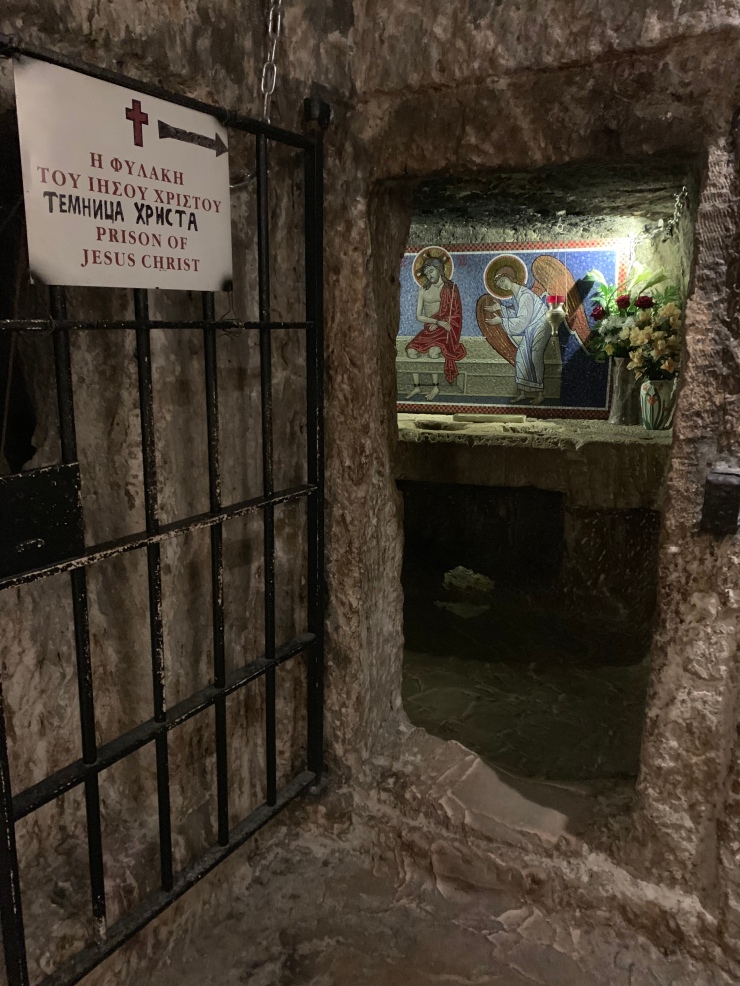 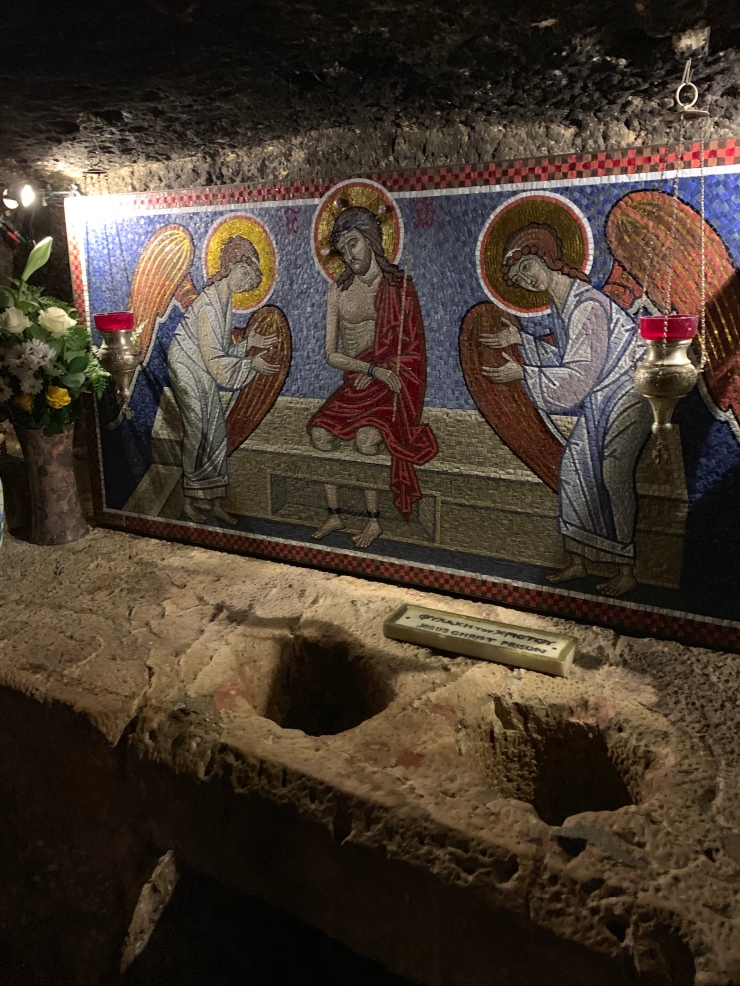 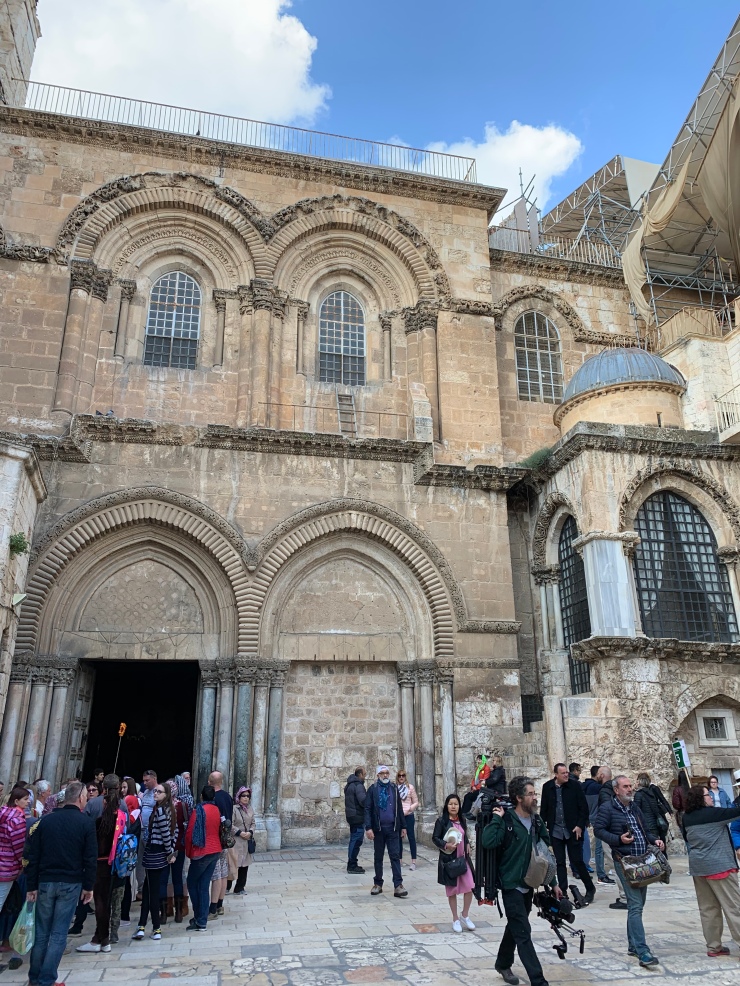 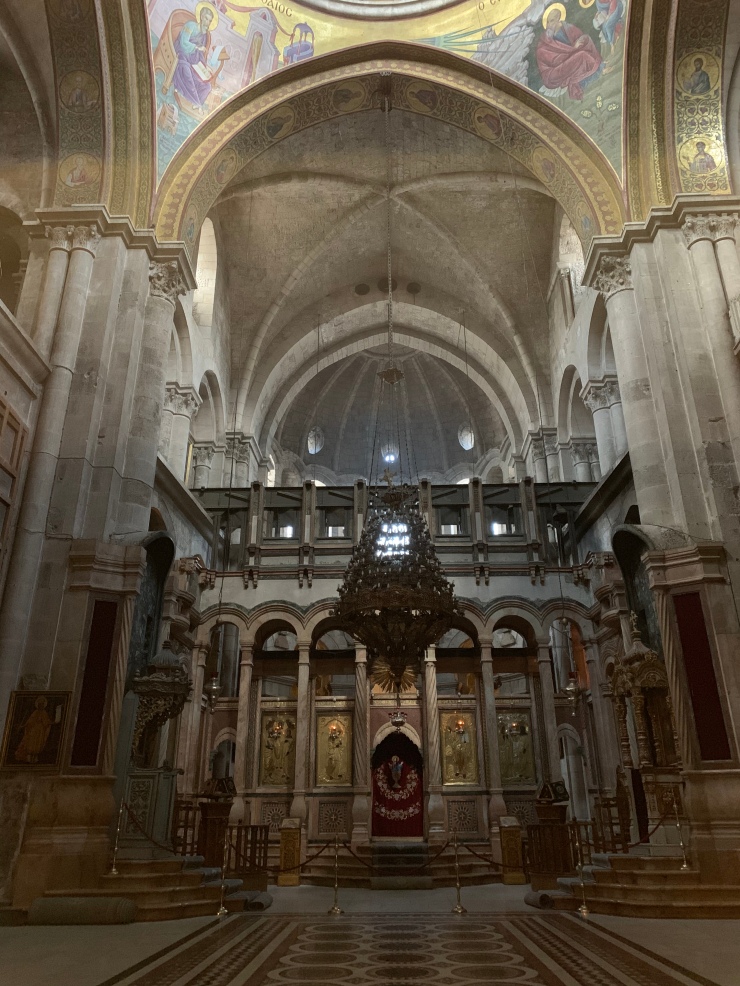 8. Continue to the Western Wall 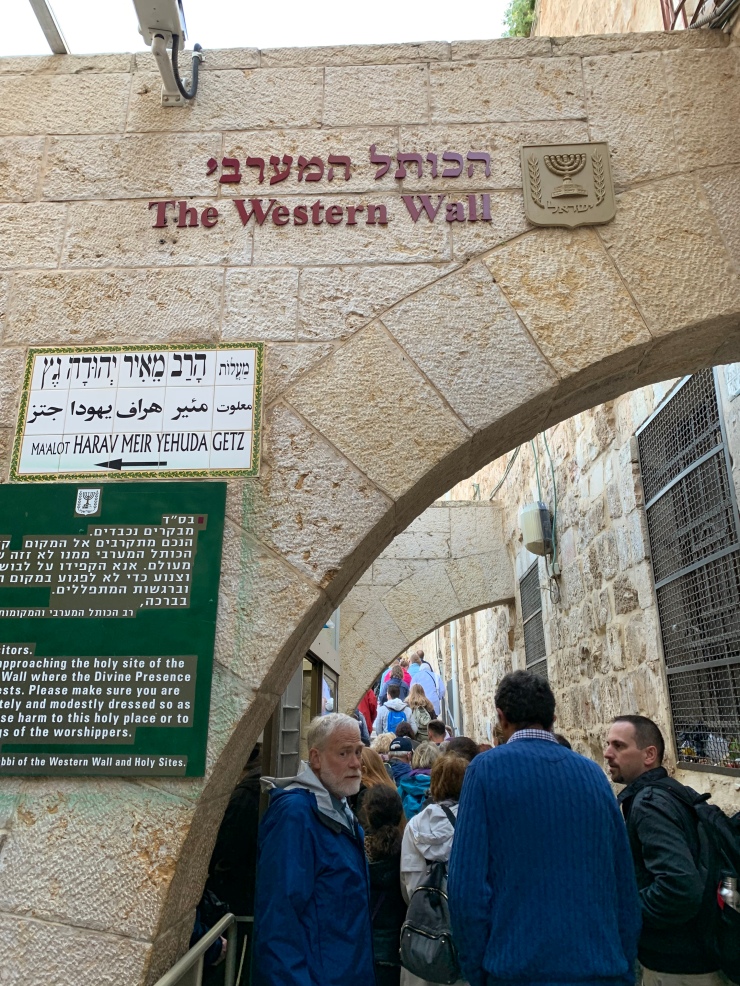 9. Pass by Roman ruins onto the way to the Tower of David

If you want to continue your walking tour outside of the Old City… I then walked (a nice walk, probably about 1-1.5 miles) to Mahane Yehuda Market, which is one of the most popular local markets in Jerusalem. If you aren’t up for the walk, the rail system will take you right there! Unfortunately, many of the stalls and shops in and around this market close early (by 7pm), and because I went after I finished playing tourist for the day, I didn’t get to spend much time there. I did try another traditional Jewish dessert, Kanafeh. (Update: I now have it on good authority that this is actually a traditional Arab dessert, not Israeli. So for the best version, you go to Arab villages, not Israeli markets.) But I can’t say I’d recommend this unless you LOVE sugar. And by love, I mean, in the way a child will eat an ice cream sundae with every variety of chocolate, carmel, marshmellow, etc. syrup (all on the same sundae, of course), that sits on top of cake (but the corner slice that is mostly icing) with a cookie on the side. I could barely handle a few bites because it was so disturbingly sweet. (And expensive! I paid about $9 for a piece of kanafeh!)

My final tip: public transit in Israel is your friend, because taxis are expensive. While they do have a ride sharing app (it’s called Gett), it’s less like uber and more like Halo, because only taxi drivers can operate and the fee is fixed based on the meter cost, so you pay the same as if you hailed a cab on the street. That said, for your return trip( to Ben Gurion (if you’re staying in Tel Aviv, I’m not sure if this works from Jerusalem), you can download and use Hadar Taxi (select English from top left of the web page) and it will only cost you $30USD (you order through the app but need to have cash to pay the driver), which is way better than the $46 I paid through Gett upon arrival. (Yes, they do have public transit options and that would have definitely been the way to go if I wasn’t hauling around such a large and heavy suitcase.)

Despite the attack on Israel the day before I arrived, I never once felt any tension or danger. Perhaps when you live in an area that is so frequently subjected to conflict people are just used to it and it takes a lot to shake them. Either way, I fully enjoyed my time in Israel and genuinely wished my trip had been longer.

2 thoughts on “Four Days in the Holy Land”