I’m going to cut to the point: Chaing Rai is just awesome. I mean that in the literal meaning of the word- it is awe inspiring and extraordinary. The most impressive temples I have visited anywhere in the world are in Chiang Rai. This is also the artistic “capital” of Thailand, and it doesn’t take long to see why. Chiang Rai is still primarily agricultural, so the majority of the 1.1M-1.2M residents of the province live outside of the city; only 70,000 live in the city itself.

I only planned one full day in Chiang Rai, which was enough if you’re ok doing a whirlwind tour like I did, but definitely not enough to fully enjoy this beautiful and charming (and way less touristy) gem in the north. Knowing I had such a limited amount of time and would need to hit the ground running, I decided to book myself a fancy hotel room and let the hotel coordinate a tour for me. While communication presented a few obstacles prior to my arrival, once I arrived, everything worked out perfectly, and I received such wonderful service (and had a great tour guide and driver, see below) I would definitely do it this way all over again. I stayed at the Le Méridien Chiang Rai Resort (this swanky place cost me about $140/night, which is expensive for such an affordable Thai city, but way cheaper than what a hotel this nice would cost in most cities in the world, so I found it was definitely worth the splurge). The view from my hotel room/balcony was spectacular.

I was met at the airport (just before 9am) by my tour guide for the day, Waew, and the driver.

I had a huge (we’re talking, 10-12 seater) lux van all to myself for the day. I came with a list of a few places I read about online prior to my arrival, and Waew suggested a few more stops that we could fit into a single day tour. Plus, having their expertise to know the best order to visit things was priceless! Though the tour itself certainly had a pricetag, and it was not cheap. I paid about 7,000THB ($222USD) for the day, including airport pickup and dropoff at my hotel. That said, this was the price for the guide and driver for the day no matter how many people were going, so if you and your family or friends are taking a tour, the per person cost of sightseeing Chiang Rai this way could be super affordable. Here’s what I squeezed into my day in Chiang Rai…

In Chiang Rai, this Temple represents heaven (though elements within show heaven and hell). Entrace fee = 50BHT/$1.60USD. This spectacular Temple was imagined, and has been built by, Chalermchai Kositpipatm. A successful artist who got rich from his artwork, in the 1990s he moved home to Chiang Rai and started construction of one of the most unique Temples in the world. Waew told me he now employs 2000 people who are working at the Temple, including ongoing construction and development. His design plans are so grand he doesn’t plan to finish in his lifetime; has plans for two more generations of workers to complete the Temple. You are prohibited from taking photos inside the Temple, which is a shame because it is extraordinary. So you’ll have to visit this awesome site in person to see for yourself!

This Temple was perhaps my favorite; blue is my favorite color after all and this place just pops. I also believe wholeheartedly that God loves so much when people use their talents and shine when creating a place of worship! The artist who built this Temple was a student at the White Temple, and you can see influences here from his experience their, as well as by the Black House. Admission is free and you can take photos inside!

Seriously, thank God for all of the incredible artists in Chiang Rai, and for their success. Because there are a lot of incredibly rich (by any country’s standards) artists who have turned around and decided to give back to this community, and everyone benefits. The Black House is not a temple, rather, there are about 40 private structures/houses, all with different architectural influences (taken from his international travels) you can visit. The cost of admission is 80BHT/$2.50USD. Given the stark contrast to the White Temple, Waew told me this place is “hell.” While I appreciated the creativity of many of the structures, as well as the opportunity to see a wonderful performance with dancers in full, traditional costume, I was not a fan of the crazy number of dead animals (bones, skins, blankets, rugs, etc.) throughout all of the structures. This artist really loved taxidermy 😦 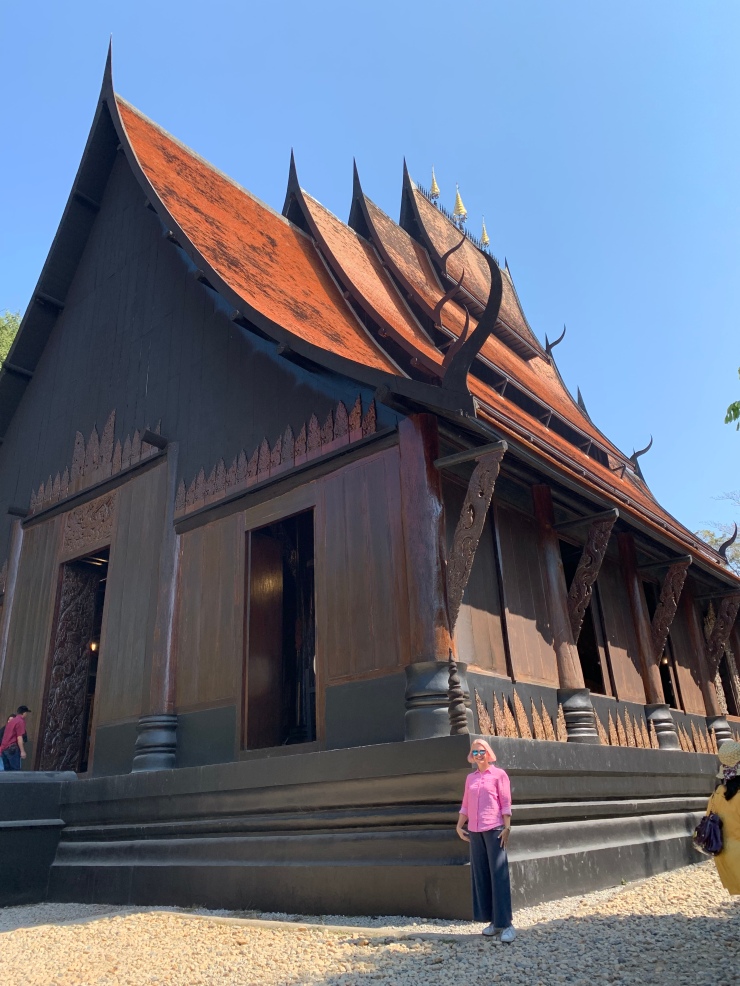 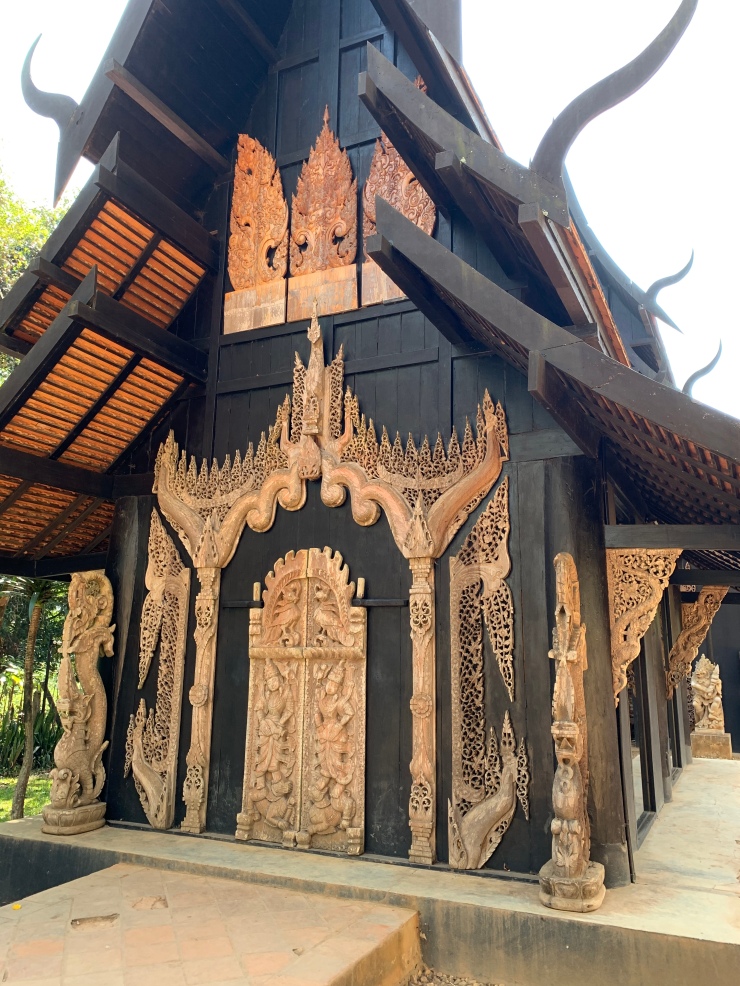 Following our stop at the Black House we had lunch at local restaurant. I wish I could tell you the name, but everything was written in Thai only. We had amazing pad thai; I paid for all three of us (Waew, the driver, and me), and the total cost was 100BHT/$3.20USD. God I love Thailand!

The tea plantation has been operating since 1977. They grow and produce organic oolong tea. Entry to the tea plantation is free and you can get free samples at Tea Shop 1. The property is gorgeous and this would make for a lovely afternoon stop to spend a few hours relaxing and strolling the tea fields. 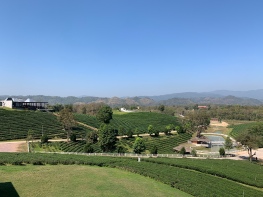 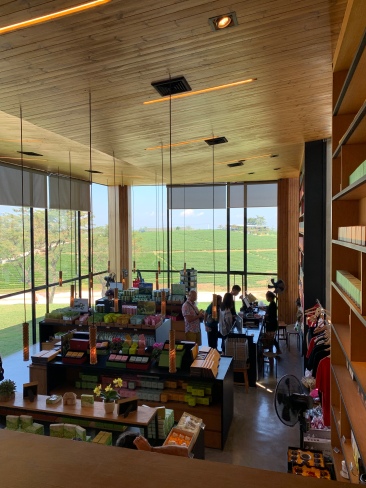 The Royal Villa is the former home of the King’s mother. Mae Fah Lung literally translates to “Huge Sky Mother”, as she is beloved. In fact, the airport in Chiang Rai is named after her. She initiated a project to stop opium production in the mountains of northern Thailand by replacing opium crops with coffee, strawberries, and macadamia nuts. The project has been an overwhelming success, and growth and use of opium has dramatically declined in northern Thailand’s tribal villages. Several of these villages became so successful with the growth of new crops that they were able to replace huts with permanent houses. Understandably, residents of this region have profound respect and admiration for Mae Fah Lung. I skipped the visit to her Villa, but did spend a lot of time strolling through the Gardens, which cost 90THB/$2.80USD for entry (the Villa also costs 90THB). The gardens are stunning and well worth spending time strolling around.

It takes about 1 hour by car from Doi Tung (the mountain on which the Royal Villa and Gardens are located) to reach the Golden Triangle. The Golden Triangle is, geographically, the point where Thailand, Myanmar, and Laos all meet. 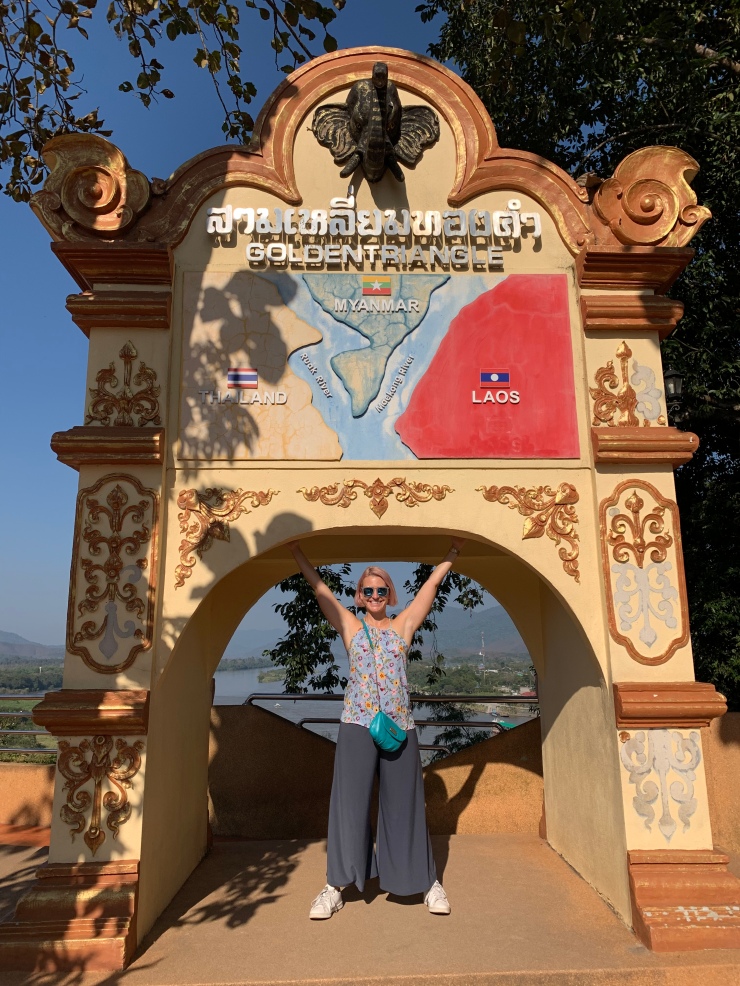 The cultural significance of this place is a bit more complicated: it’s known as the golden triangle because this was a significant growing and trading region for opium. There’s an Opium Museum that’s interesting to visit, and worth it if you’re in the area (it doesn’t take a lot of time to walk through). In this same area is a huge (by virtue of size and its weight; according to Waew, it clocks in at 59-69 tons) golden Buddha statute beside the river at the Golden Triangle. Given the distance, I’d say that if you need to cut time somewhere, skip the trip to the Golden Triangle (unless you want to make more of a day of it, and take a river cruise in the area). 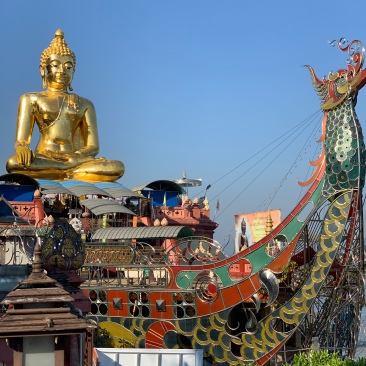 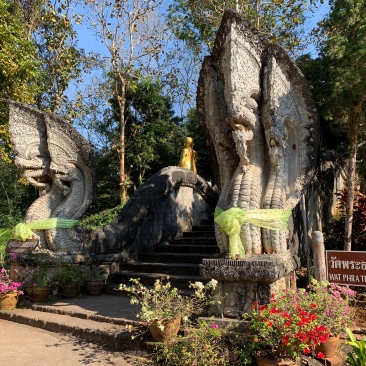 Chiang Rai has a great weekend market where you can find plenty of clothes, accessories, artwork, or other goods to purchase, and my favorite: a massive food court area with no less than 50 food stalls where you can find dinner to suit any craving. 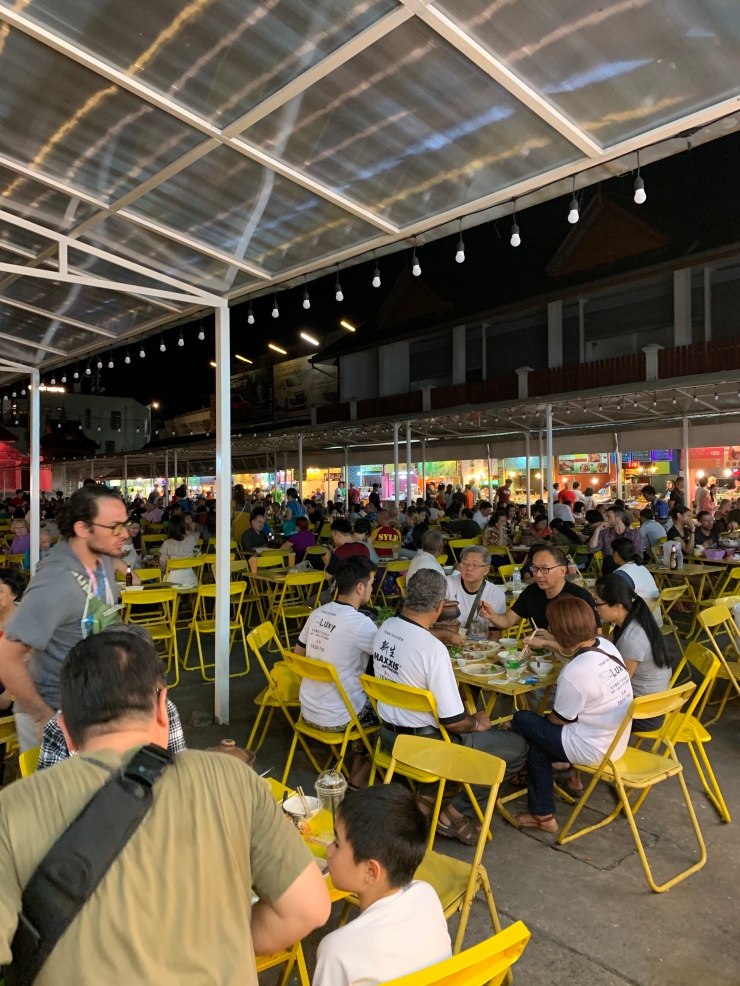 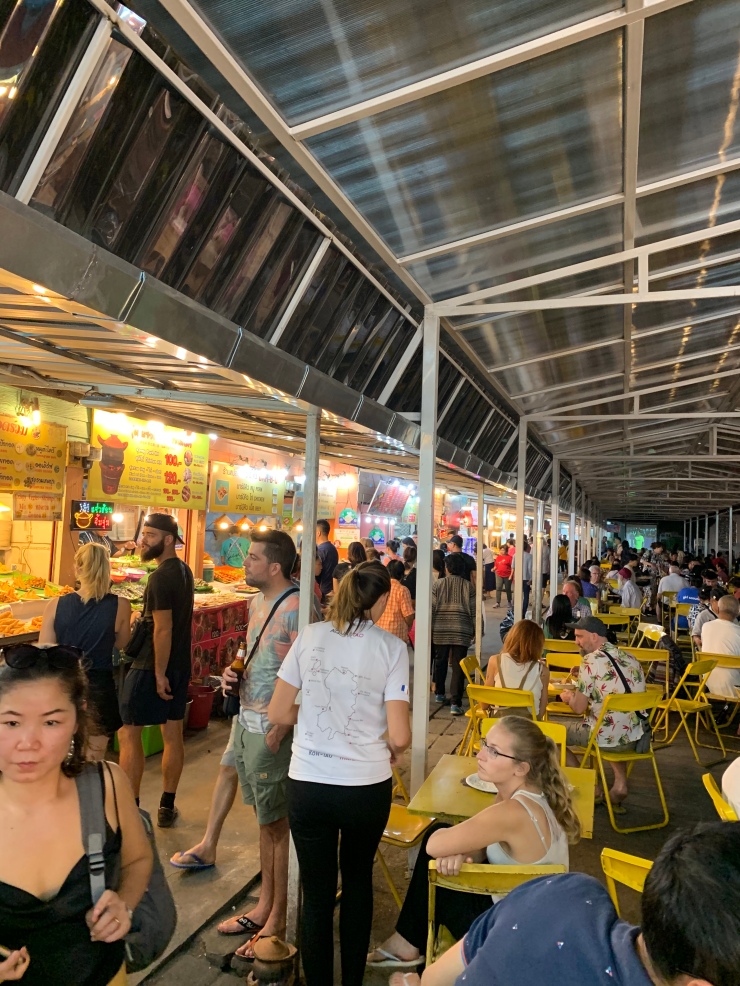 Chiang Rai is definitely worth a visit during any trip to northern Thailand. My only regret: that I didn’t spend more time there before moving onto Chiang Mai, its more well known (and much larger) sister-city in the north. You can read all about Chiang Mai in my next blog. Until then, happy travels!

1 thought on “The Beauty of Northern Thailand, Beginning with 1 Day in Chiang Rai.”