Last year, while still gainfully employed, I received an offer from SPG (now, Marriott) for 5 days in Maui, plus a rental car, for the cost of what would normally be 1-2 nights at the same resort. Naturally, I jumped on that offer. Only catch: I had to complete my visit within one calendar year of purchase, which expired late November 2018. Since there is no place close to Hawaii, I decided to make my life as easy (and affordable) as possible by flying to Maui when I was already in Los Angeles. I booked a one-way ticket on Hawaiian Airlines (and paid for premium economy- extra leg space is key when the flight is > 5 hours) direct from LA to Maui (OGG) for just under $350!

I arrived in Maui Sunday morning, October 28. After picking up my rental car I made a stop at Costco (just down the road from the airport) and picked up groceries for the week- and a couple bottles of wine. Then I drove to my hotel, the Westin Ka’anapali Ocean Resort Villas; the drive takes 30-45 minutes, depending on traffic. However, one piece of advice: allow yourself a minimum of one hour when you are under any sort of time pressure, because if there’s an accident the two-lane road to/from the airport becomes a parking lot and this can easily double or triple your commuting time. After checking in I got to my room and was thrilled to see I had been given an ocean view! Nothing like waking up (and going to sleep) with the ocean right there. 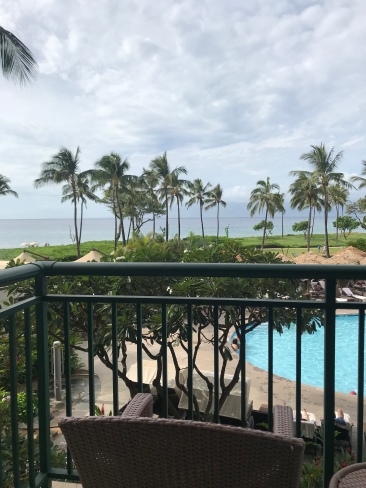 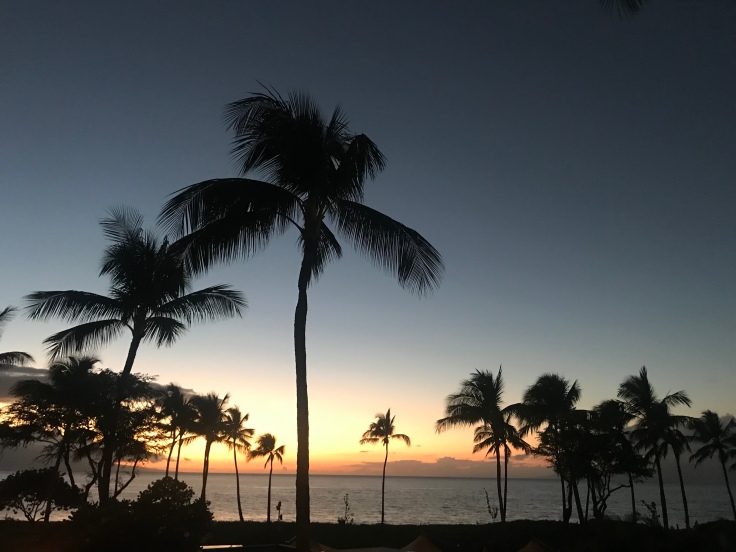 This Westin resort is lovely, and the perfect pick for families (especially, with children) and senior citizens. But I’m quite sure I was the only solo traveler at the resort. Not a bad thing, but it does decrease the chance of striking up a fun conversation with a fellow traveler at the hotel. Of course, I didn’t spend too much time in the hotel anyway, as lovely as it was. Also, way better for my budget to take advantage of all the free, amazing outdoor activities available on Maui. On Monday, my first full day on the island, I drove up to Maui’s north shore (a distance of only 27 miles, but one that takes close to 1.5 hours to drive given that much of it is a one-lane road, with two-way traffic, and tons of hairpin curves- WAY more challenging than driving along the Road to Hana) to hike the Waihee Ridge Trail. There are SO many amazing hikes in Maui, and I picked this one as an excuse to drive up north (and for anyone who wants to see the island’s natural blowhole, this route takes you past that). The trail is just under five miles, round trip, and has a decent incline on the way up, making it a good workout. The views from the top are supposed to be spectacular, but as you can see from this photo, all I got was a wall of clouds…

I still enjoyed pretty amazing views on the way up and down, and got in a nice workout, so it was totally worth it. 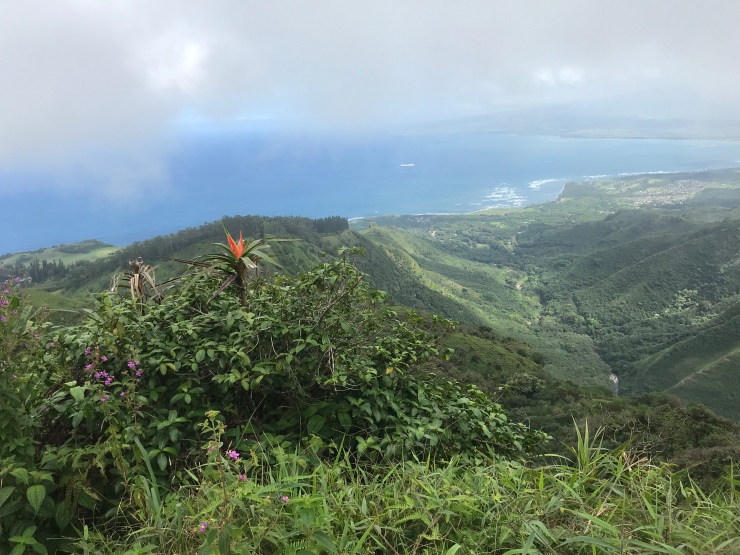 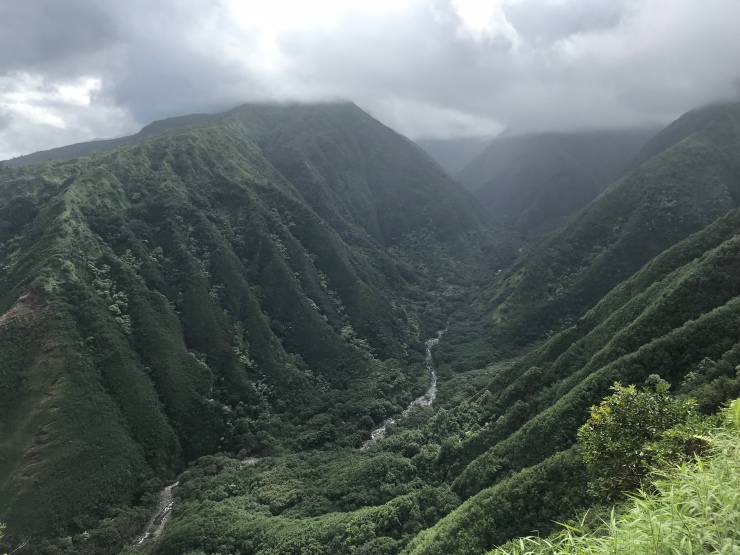 Plus, when you drive this way, you can stop at Julia’s Tree House for her insanely good banana bread. (Btw, homemade banana bread is seriously a thing on Maui. It’s sold everywhere.) Since I’m trying to focus more on my health, I didn’t eat at other places to offer a comparison, but I can say that Julia’s is BOMB and the ladies working at this stand were soooo lovely I think everyone should go there! 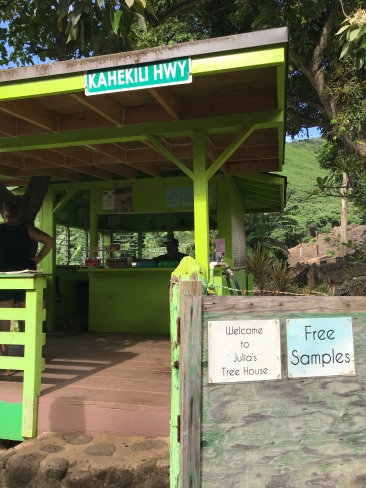 On Tuesday, I met up with a super nice guy and long time Maui resident, Josh, who got me back out on a board. It was nice to see that I actually did learn to surf in Morocco! And how much better I do when the waves are gentle; oh, and it’s much nicer when you don’t have to stuff yourself in and out of a wetsuit like sausage in a casing. The water in Hawaii is so warm that a rash guard is all you need. And water shoes, because lots of rocks on certain beaches! The highlight of this day was definitely when Josh introduced me to a fellow surf instructor out on the water with his pitbull! And then when that guy had his pibble jump on my board so I could surf with the pibble! I was determined not to wipeout with a 4-legged friend on my board, and thankfully, was successful. On Wednesday, I decided to finally spend one day fully resting and relaxing on the beach- and reread The Alchemist (by Paulo Coelho). If you’re not familiar, it’s a story about a boy in Spain who had the courage to leave the path his family set out for him (as a priest) because of his love of, and desire to, travel; this same boy also had the courage to leave behind everyone and everything he knew, the wisdom to follow the signs and listen to his heart, and through his journey he learned his true destiny and purpose on earth. It’s also a story about love, about learning, about God and the connectedness of all people, and about so many other things- this is a book that will resonate with each person differently, depending on what stage of life you’re in. But it’s easy to tell why it struck a chord with me so much. Wednesday was also Halloween in Maui, so I went to the biggest party on the island (on Front Street in Lahina), because it was only 4 miles from my hotel. I failed to pack a costume with me, but not sure that it mattered, because when I arrived at 9pm, it was clear anyone still out had been going HARD for a long time. So most of my night was spent talking and people watching.

For my last full day in Maui I decided to drive to Hana. On my aunt Julie’s advice I drove the reverse way- heading up country on Hwy 37, which becomes 31 (Piilani Hwy), and coming back on the northeast shore. When I looked at a map, it looked like this road went straight through the middle of Maui, so I wasn’t sure what views I would have. I quickly learned that this is by far a more jawdropping, breathtaking part of the drive. For those who drive the “normal” way to Hana and then turn around and head back that same direction, you miss out on the prettiest part of the drive! But as to whether I’d recommend driving this way… you definitely have far less traffic in front of you, but the closer you get to Hana (when the roads are at the most narrow and you have two-way traffic on one-lane roads) the more you have to deal with heavy traffic coming at you in the opposite direction. So you end up having to stop, pull over, back up, and wait WAY more than traffic taking the normal route- because when there are 10 of them in a row and only 1 of you, they only have to stop or pull over once, while I had to do so 10 times; you see the point. If you want to avoid traffic, just get a very early start. Also, when driving on this stretch of road, there are limited options for places to stop for food, drinks, and a bathroom. I decided to grab a coffee at “Grandma’s Coffee House”, a cute place fairly early into the drive on Hwy 37; they also have a lot of food and plate lunch specials. This turned out to be the last place to stop for food until you get close to Hana (which is another hour-plus away); the only other establishment you pass is the only winery with tastings on Maui, maybe they have food too? But Grandma’s does not have a bathroom you can use, boo! When driving on Piilani Hwy you pass by black lava rock beaches and spectacular views of this deep-blue water beating against the island’s cliffs. The photos below, as beautiful as they aren’t don’t do the scenery justice. 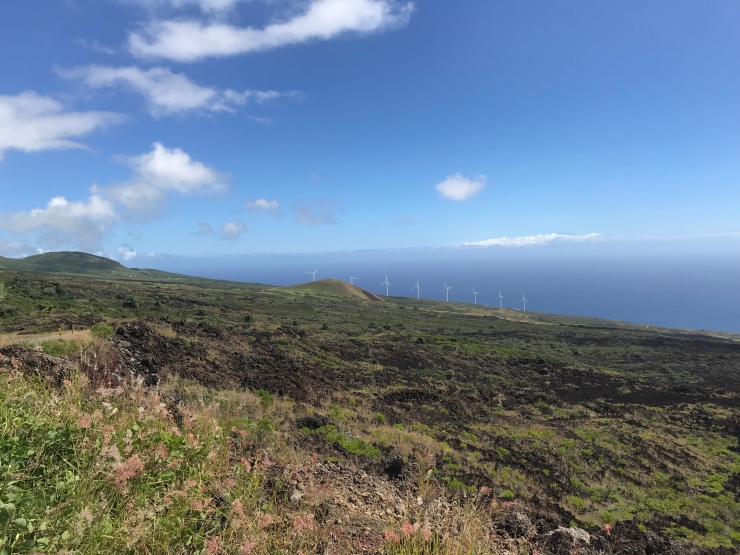 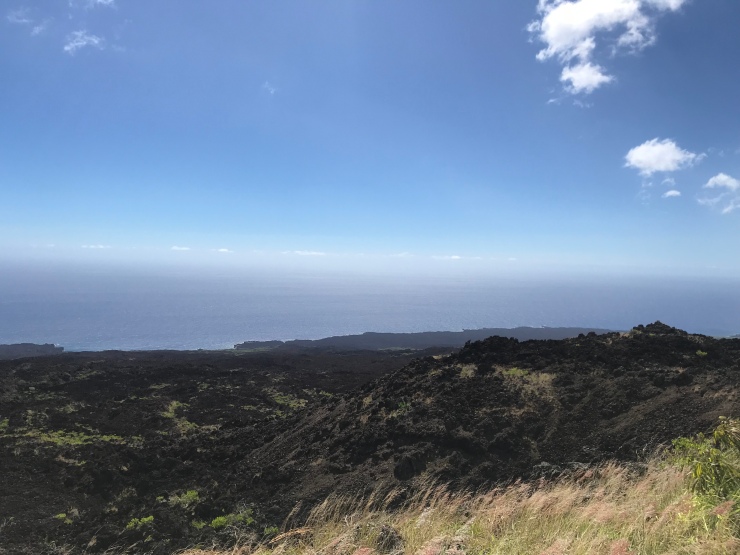 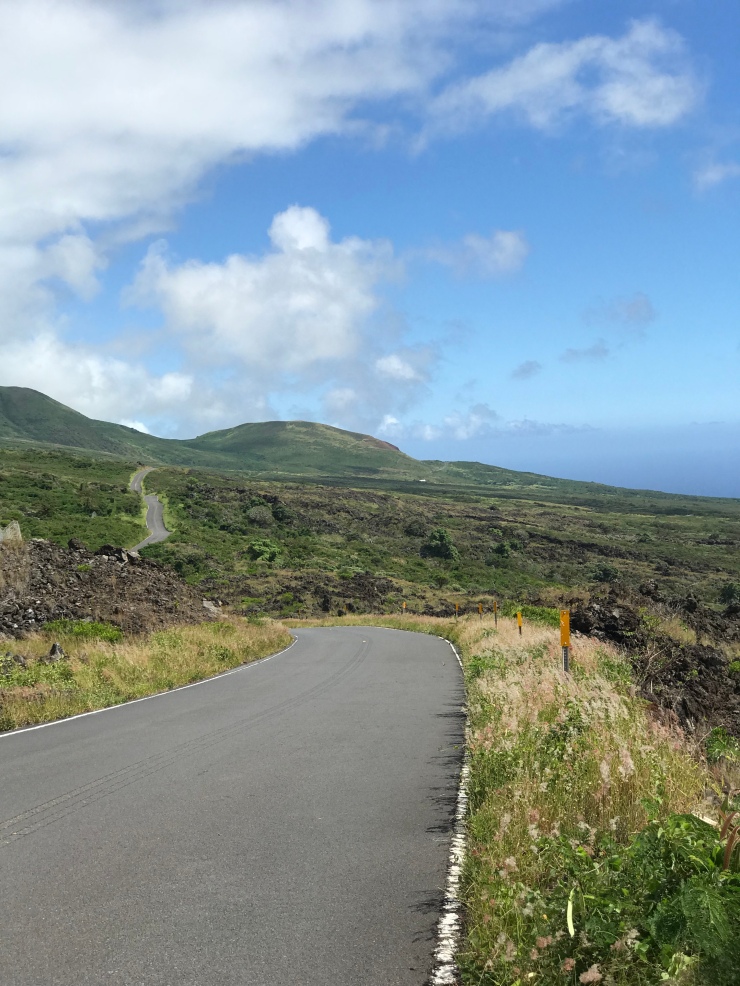 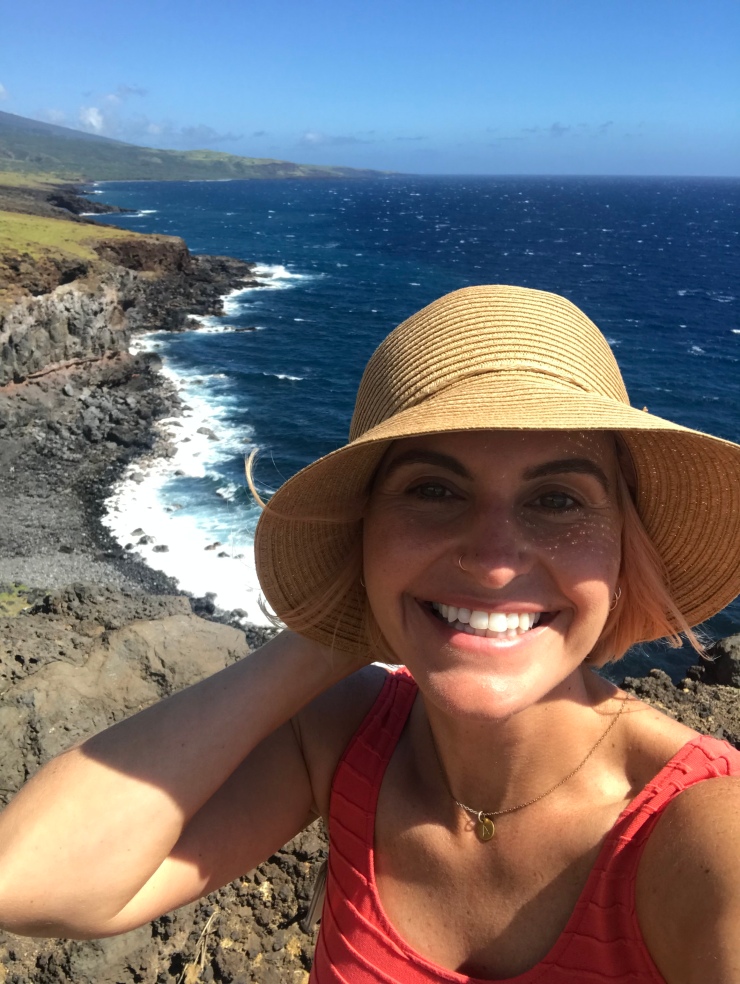 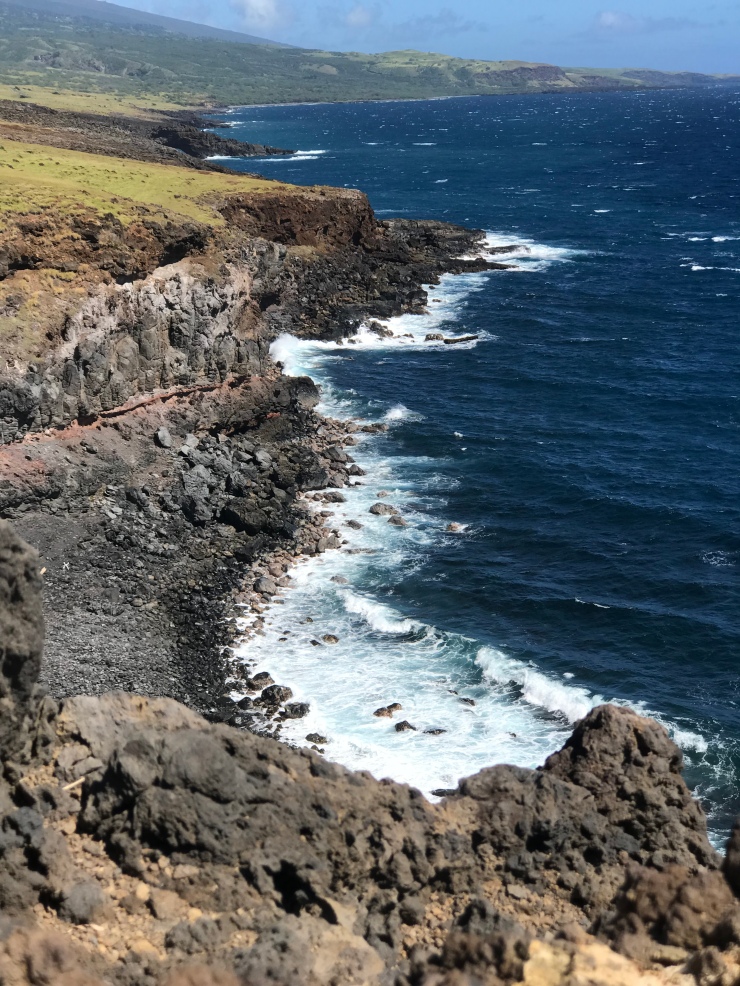 When I finally got to Hana, I knew I had to get some food- the drive back was going to take at least 3 hours and I was hungry. So I found a few food trucks and stopped off at one that seemed affordable, had decent reviews online, and had plenty of vegan and vegetarian options- The Surfing Buro. The food (I had a veggie taco, only $4) was quite good, but the smoothie ($7!) was disgusting. It was like trying to drink chalk. I gave up after drinking about 1/4 and threw it away. I would recommend it for the food, but stay away from the smoothies. 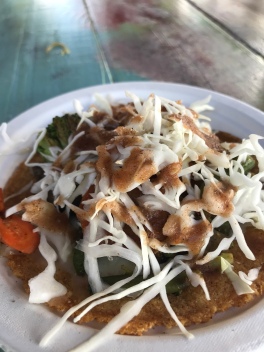 The drive to Hana really did take the entire day. But if you have the extra time and want to really see the island, this is the way to do it. My final stop in Maui was to another place my aunt Julie recommended- Ululani’s Hawaiian Shaved Ice. It really was delish (highly recommend)! And with that, my final day in Maui was complete, as was the official 5 month anniversary of my travels. I am still very much enjoying myself and feel like I’m just beginning to scratch the surface of this big and beautiful world, but at the same time, I’m excited to be in one place for a few weeks, unpack my suitcase, cook for myself and workout on a consistent basis… and hey, when you can do so in Hawaii, why not?! My journey in paradise continues on Oahu! The next post will be a few weeks away but stay tuned. Until then, aloha!