My trip to India has been quite the experience. I arrived not quite sure what to expect, and leave having learned a lot that will be useful as I plan future trips. First, India can be a hard place for a solo female traveler. Traveling to parts of the world that are not as safe for solo female travelers means you end up stuck in a hotel room, a lot. Which is not something I enjoy. In India, I was blessed to have friends with me most of the time, but during my solo trip to Jaipur learned how much I needed them (or someone, I was fine when with a guide) to feel safe and really experience/enjoy a city. I have no interest in traveling only to English speaking or first world countries, but knowing this will make me take more care in planning trips to certain countries; for example, I normally avoid tour groups like a plague, but Jaipur would have been much better to have a group of people to hang with outside of formal tours, to actually be able to explore the city. So my advice for traveling in India: go with or visit friends, or have a good tour guide/group, because it’s a hard place to enjoy solo (exception: Udaipur, which is beautiful and totally safe for solo female travelers!). Second, the food in India is just AMAZING and you can eat like a Queen for such cheap prices it’s crazy. Nor do you need to stick to bland food to avoid stomach/intestinal issues. I ate everything I wanted to, tried regional dishes everywhere I traveled, and ate spicy food with no problems. All by following the advice friends gave me prior to my arrival: (1) only drink bottled water, and only buy bottles from actually shops (no buying water on the street or from carts). Depending on the restaurant you’re in, beware of bottles that have been recapped; if I had a question, I ordered soda water, which worked great most of the time (in Amritsar, had to be careful because some bottles of soda and soda water were rusted at the top, so clearly used). (2) Eat only cooked food. Exception to this: fruit with thick skin that must be peeled and that isn’t washed with water before you eat (think: bananas, watermelon, papayas, pineapple). Forget about eating salads or veggies that are raw, because they have been washed in water that will probably make you sick. Doesn’t matter if you’re in a local restaurant where meals cost $2 or a 5-Star restaurant. (3) No street food. Period. If in a train station or other such area and you’re hungry, plenty of processed food in bags you can buy to snack on. Third, India is an assault on your senses. Driving is complete chaos. Imagine if you will the busiest intersection you’ve ever been to, at rush hour. Now remove traffic lights, throw in tons of motorcycles and scooters, pedestrians, and dogs and farm animals (the animals, especially cows, ALWAYS have the right of way, whether you’re in a city or on the highway), and instead of using a blinker imagine that everyone is honking horns to communicate turns, that they are approaching or passing you, that they need you to move over, etc. And remarkably, they manage this so artfully that I’ve seen only one accident my entire trip (and it didn’t appear serious). Fourth, the service here is probably the best I’ve received anywhere in the world. Restaurants, hotels, anywhere really- people are genuinely concerned about you having a good time and they take so much pride in the service they provide. Fifth, if you are white, you’re an attraction. Strangers will want to take photos with you; most ask, some just immediately start taking selfies with you in the background. I thought it was refreshing to be in a part of the world where I am not surrounded by white people, and instead, in certain places, was the first white person some people had ever seen (I traveled with Bhavna and her family to a temple that is definitely NOT a common tourist attraction). And yes, I was happy to take photos with people (at least, all of the women who asked). Finally, treatment of street dogs needs improvement. I saw too many acts of abuse that left me in tears. But being a white female who doesn’t speak Hindi, it wasn’t safe for me to intervene or yell at the men I saw hitting/kicking dogs. Which also frustrated me. I will never understand what compels people to hurt defenseless animals. Witnessing animal abuse in foreign countries and feeling completely powerless to do anything is a heartbreaking feeling, and definitely gives me pause about travel to certain places again.

Now for the specifics…

For my flight, I took Norwegian from Chicago to London (see prior post re recommendations about this airline) and built in a 2 day layover. Then used a combination of points and cash to be able to fly business class to Delhi (for less than $450!!). I’ve only flown business class a few times in my life and it’s such a treat!

So relaxing. Nothing like a good stretch and rose champagne!

Had been wanting to see this movie since it came out. So good! 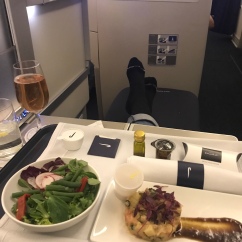 I arrived in Delhi on 19 August and spent the first few days being shown around by Aasheesh and his lovely wife, Anindita. They also took me to Agra to see the Taj Mahal, which was spectacular! (Details on that below.) Aasheesh was one of Sean’s (my little brother, R.I.P.) best friends and we had not seen each other in about 10 years, so it was a blessing to see his home, meet his family, and spend some time with him. They showed me around Delhi and introduced me to so much great food; because they live in the suburbs I am not posting names of specific restaurants or hotels, because there’s little reason a tourist would visit this part of Delhi unless you have friends here. But I am posting photos of specific food dishes I loved, which you can find in restaurants pretty much anywhere. And on one of my last nights in Delhi I stayed in the city, in the New Friends Colony area, and ate at a restaurant so good it definitely makes the list of 10 best meals of my life: Carnatic Cafe. If you find yourself in Delhi, you MUST go here! (Another Delhi tip: Treebo is a well known hotel chain and for about $35/night you can get a room. Fantastic hotel, insanely cheap, what more do you want/need?!) After my first few days in Delhi and Agra with Aasheesh and Anindita, I headed out alone (and by alone, I mean I had a prearranged tour with a driver) for two days in Jaipur and two days in Udaipur. Details on both cities in an upcoming post. My trip finished off when I joined Bhavna and her awesome kids, Satvik and Vihaan, on a trip up north to Amritsar (another future post).

Aasheesh and Anindita were kind enough to pick me up from the airport in Delhi (btw: awesome airport! No line at customs and super secure, nobody bothering you while you’re waiting for bags and even when you exit the airport, you’re not overwhelmed by taxi or rickshaw drivers). We did visit some popular tourist sites, including the Rajpath and India Gate, but my favorite parts of Delhi we’re spending time with Aasheesh and his family and the FOOD! My favorite restaurant in all of Delhi (correction: all of India!) was recommended by Bhavna- Carnatic Cafe. An entire menu of different kinds of Dosa and I ate enough for two people, no regrets! The first was a savory, spicy dosa, and the second was sweet… imagine if you will that someone figured out how to make a filling that tastes just like a Girl Scout Samoa (aka, Caramel DeLites) and it’s wrapped inside a coconut crepe? Because that bit of heaven is pretty much what this tasted like. If you find yourself in Delhi, Carnatic Cafe is a MUST! 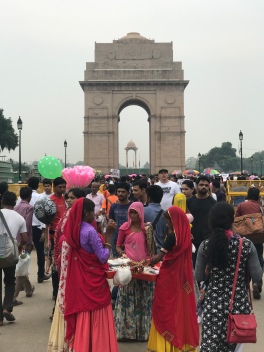 People all along the Rajpath selling corn.

This child was so adorably excited while watching a film. I couldn’t help but take a photo. 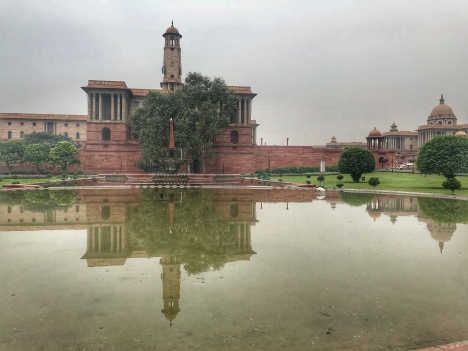 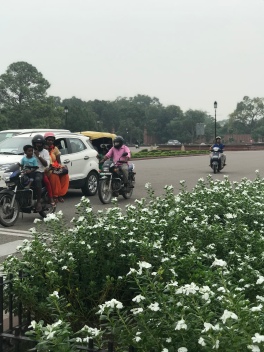 I’ve been away from Asia for too long. Had to smile when I saw this entire family on the bike. 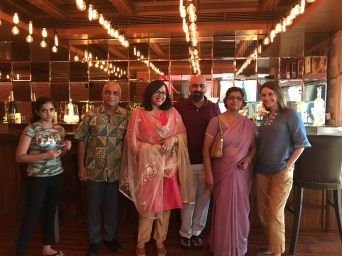 Ugrasen ki Baoli. Wish I could have spent more time there, it was amazing. But the mosquitoes were so thick we ran in and out, stayed only long enough for me to snap a photo.

Indian version of Chinese food. Kung Pao Cauliflower and boy it was YUM!

When you order food delivery the food comes in these ceramic pots! Mind blown!

And Carnatic Cafe, which gets its own special section: 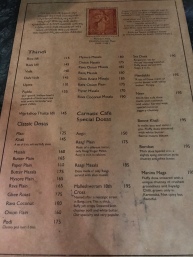 When a menu says something is their specialty, you’re a fool if you don’t try it! 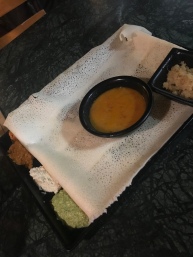 Neer. Life changing. Yes, it is that good!

Aasheesh and Anindita were kind enough to take some time off work and take me to Agra so I could see the Taj Mahal. It was about a 2 hour drive from Delhi (3 from their house, because they live in the burbs) and that time is inclusive of stops we took along the way (and more food!). In a cafe along the Expressway is where Anindita first introduced me to dosa, and I’ll forever be in her debt for this! Dosa is a traditional, South Indian food, commonly served for breakfast. I am comparing it to the Indian version of a breakfast burrito (but much lighter and no eggs), and who doesn’t love that? There’s also a new road they finished in Agra, so instead of the former 1 hour-plus you had to drive through the city, it’s now about 15 minutes to get from the Expressway to the Taj Mahal. We took the East Gate road and after parking, hired a guide in the parking lot (I paid ₹1500, which is about $21), who took care of me the rest of the way. (Entrance ticket for foreigners was another ₹1100 or so.) He was by far the best guide (and photographer!) I had in India. Pro tip: if visiting the Taj, use the East Gate entrance. My Indian friends said it’s by far the best way to enter. I was blown away by the beauty of the Taj! It really is spectacular. Another pro tip: if you can handle the heat, August is an awesome time to visit because crowds are much lower than in cooler weather. And if you arrive early in the morning, crowds are even less! I didn’t have to wait in a single queue my entire visit!! And there are barely any people in my photos. Ah-mazing! The Taj Mahal deserves the hype, it’s beautiful and absolutely worth the visit! A final tip for ladies: I took a scarf in case I needed to cover my head to enter the Taj. They do not require head coverings so you can leave the scarf at home. 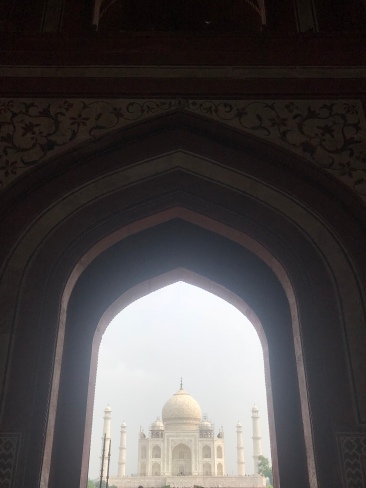 First glimpse of the Taj 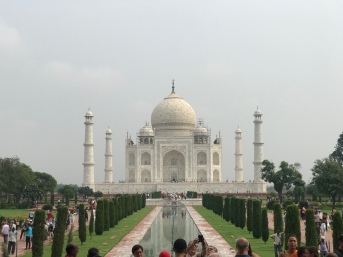 This was as big as the crowds got! 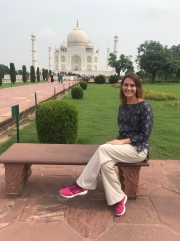 My guide was very specific about poses when he was taking photos. 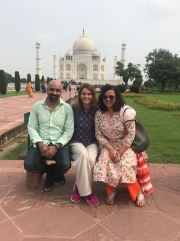 Symbol of Love ❤️ built into the marble in the interior room. 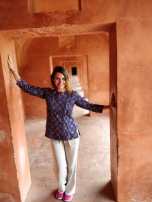 Up next: Jaipur and Udaipur. Stay tuned. 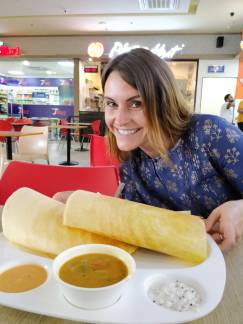 I love South Indian food! Dosa is sooooo good! The pastry/pancake looking things are fermented rice rolls (crispy and light) and inside they are filled with potatoes, lentils, onions, and super tasty spice blend. 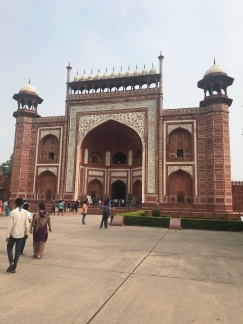 First glimpse of the Taj

This was as big as the crowds got! 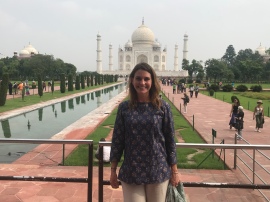 My guide was very specific about poses when he was taking photos.

Symbol of Love ❤️ built into the marble in the interior room. 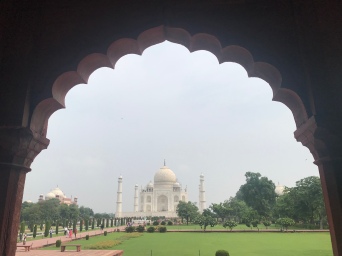